Digging for Clams in Duxbury Bay 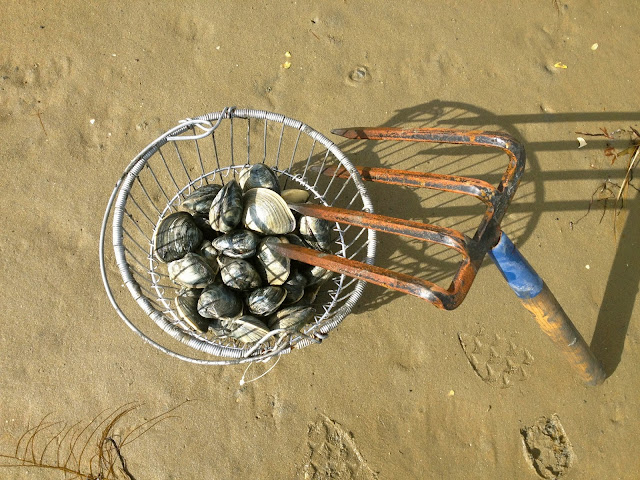 My clamming hoe and wire basket

Here in New England, we take our shellfish rather seriously.  Drive along the coast from Maine to Connecticut and chances are you'll find at least one lobster pound or clam shack in every town that has a harbor.  While Maine lobster has its national following, we here in the Bay State are just as passionate about our Ipswich clams and Nantucket bay scallops, because these labels tell us much more than the mere geographic origin of these foods.  They imply a history - one that involves a rather long and close relationship between the local people and a particular food item.  They also exude the sense of pride and joy felt by the community for these foods, often considering them to be the best of their kind.  And above all things, these geographical names are an indication of real food (something you won't find on a bottle of corn syrup, but you will find on a jug of 'Vermont maple syrup').

A house and dock on Duxbury Bay

While we were sad to leave Vermont earlier this year, I have to admit that it felt nice to be close to the ocean again and have greater access to fresh seafood.  Our home in Scituate is located about a mile and a half from one of the nicer beaches in the State.  Scituate harbor is also home to a declining local fishing industry - one that is in desperate need of support from the community.  In order to carve out a viable living doing what they love, a few intrepid fishermen have even ventured to sell directly to local customers.  We've established a relationship with one such fisherman and enjoy home delivery of lobsters caught on the same day and at a lower price than what you'd find at the supermarket.  We're hoping to expand this relationship to include fish and sea scallops during the winter months. 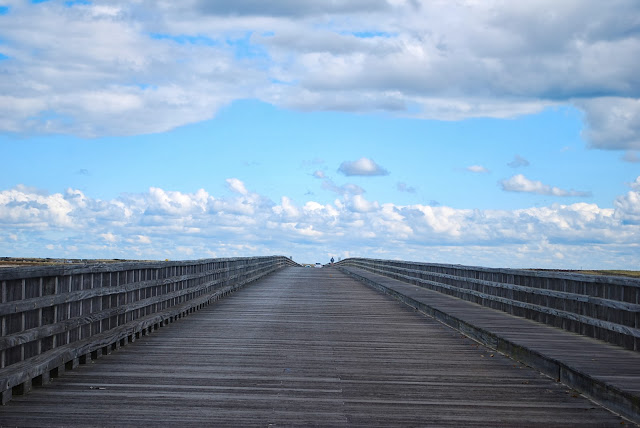 To get to Duxbury Beach, you can cross the bay by way of Powder Point Bridge

One of the first things I did when we moved back to Masschusetts was to get a recreational shellfishing license from the town of Duxbury.  Though I'd never done it before, clamming seemed like a great way to get some exercise while offering us an opportunity to take a little more responsibility for the food we eat.  Out of this experience, I've become convinced that within all of us lies an innate desire to forage.  Leaving the flats after a couple hours of light physical labor with a bucket of clams for dinner is deeply satisfying.  My favorite time to go clamming is early in the morning when the sun is still rising and the ocean air is calm.  And like most things in this natural world, this activity is often dictated by the seasons. Spring and fall offer the best times to go clamming, while the bitter cold of winter and sweltering heat of summer (not to mention the threat of red tide) can usually persuade one to forgo this activity and do something else. 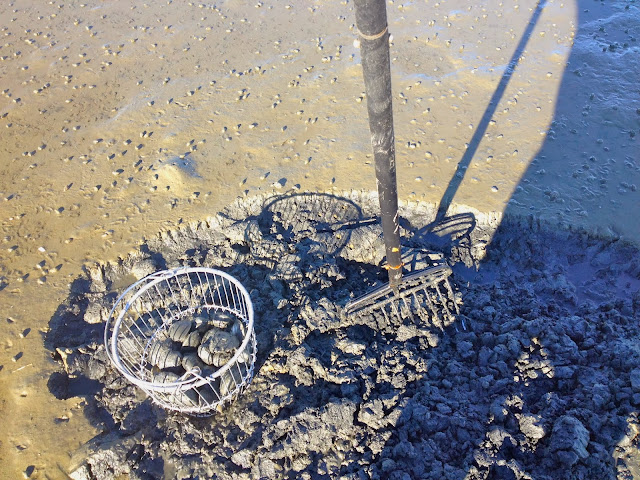 Hard shell clams lie near the surface of the sand so you don't have do dig too deep.

Duxbury Bay is about a 25 minute drive from where we live and is home to a lively group of recreational clammers who come from all over the state.  The water and beaches here are clean, and as a result, the clams  are not only safe to eat, but also incredibly delicious.  Scituate also has its own designated areas for shellfishing along the North and South rivers during certain times of the year.  However, these areas are not easily assessable without a boat.  As a result, Duxbury Bay offers a better opportunity for those who wish to clam on a regular basis.  I try to go at least once or twice a month during the cooler months. 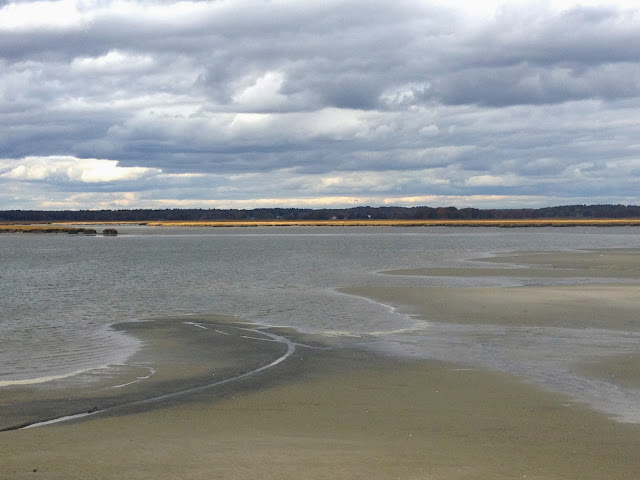 There are several types of clams you can dig for in Duxbury Bay.  I generally go for hard shell clams as they are more versatile to cook with and you are permitted to dig for them year round (excluding times when the temperature is below 32 degrees F and the flats are closed due to red tide).  Several months of the year (April, May, September and October), you are also permitted to dig for soft shell clams - better known as 'steamers' in this part of the world.  These clams have a pronounced neck and are generally either steamed or used to make fried whole clams.  Unlike hard shell clams, which lie only an inch or two below the sand, soft shells can be 6 to 12 inches deep, making them much tougher to forage.  Duxbury bay is also home to Atlantic razor clams, which are no where near as big or popular as their Pacific cousin.  Finally, if you head off the flats and stroll along Duxbury Beach, you can hunt for sea clams, which can average 5 inches in length or more.  These clams are often cut up and used for fishing bait, although Howard Johnson  used them to create the world's first fried clam strips.  I've tried making my own fried clam strips with these clams and the results were rather tough. 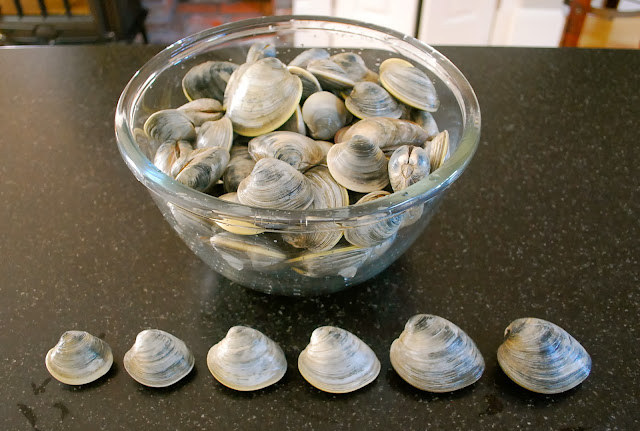 When clamming, you usually end up with a bucket of hard shells of varying sizes including little necks (left), cherry stones (middle) and quahogs (right).

After a couple hours of clamming, I usually end up with a nice bucket of hard shells of varying sizes.  For the little necks and cherry stones, I like to make clams casino or linguine with whole clams.  As for the larger quahogs, I usually remove the dark parts of the belly (which is not necessary) and cut up the flesh to make chowder, fried clam fritters or a simple pasta dish.  Chopped clams also freeze well in their own juice.  Just remember to defrost in the refrigerator overnight before using. Finally, hard shell clams can be particularly difficult to shuck; but the process is made much easier if you thoroughly chill the clams first either in the refrigerator overnight or freezer for 15 to 30 minutes. 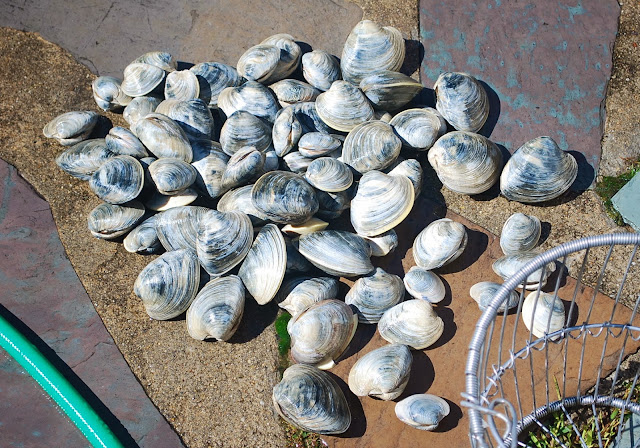 After I get home, I usually rinse my clams outside before giving them a good scrubbing.

Finally here are some tips if you decide to go clamming in Duxbury Bay:
Recreational shellfishing is not only extremely fun, but also economical. With the price of fresh clams being what they are, you can usually recoup the cost of your yearly license after only a couple of trips to the flats.  For more information on clamming in Duxbury Bay, click here.
Posted by Thomas Generazio at 11:54 PM

Email ThisBlogThis!Share to TwitterShare to FacebookShare to Pinterest
Labels: clamming