Cultivating Mushrooms on Logs - A Lesson in Patience and Human Ingenuity 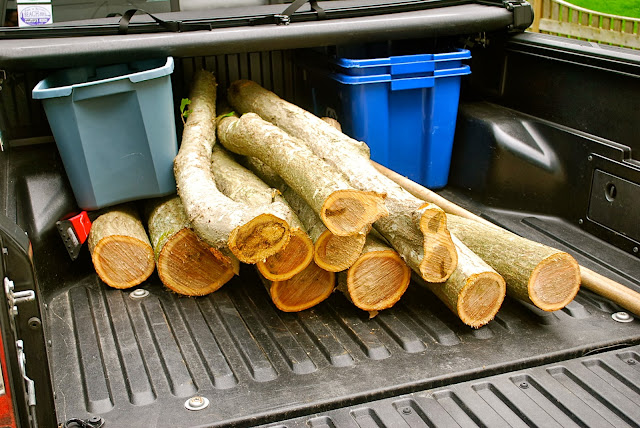 When you have a passion for food and for growing things, often you find yourself focusing on a particular food item and wondering where it came from, how it was made or grown, and whether you can replicate it in your own kitchen or home garden.  As a cooking and gardening enthusiast, I think about food and plants all the time.  For reasons lost to me now, a few years ago I started reading about modern and traditional methods of mushroom cultivation.  I was particularly fascinated by how shiitake mushrooms are traditionally grown on hardwood logs (which isn't all that surprising since they are one my favorite mushrooms to cook and eat).  And to this day, I wonder why more vegetable gardeners haven't embraced the idea of home mushroom cultivation as a way to make practical use of otherwise underutilized shady parts of the yard.  Whatever the reason might be, I for one am very excited to be able finally to try my hand at growing mushrooms. 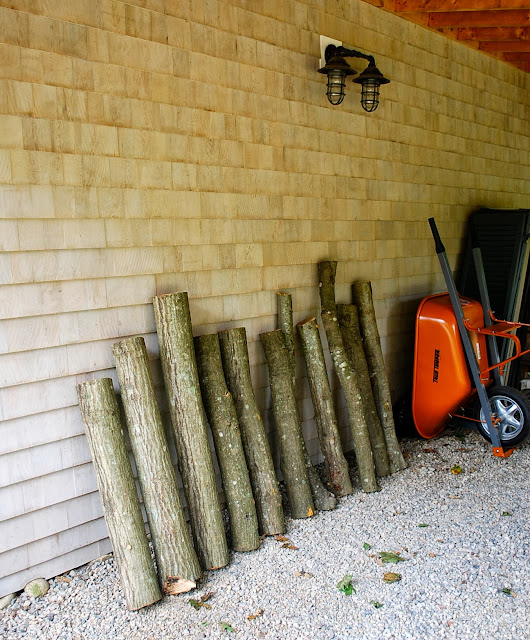 The oak logs are left to sit for a couple of weeks before they are inoculated.

The practice of growing shiitake mushrooms on hardwood logs dates back hundreds of years.  Early techniques involved simply placing logs cut from shii trees next to trees or other logs already producing the mushroom.  It wasn't until the early 20th century that the practice of directly inoculating the logs with sawdust spawn (i.e. sawdust colonized by the shiitake mycelium) began in Japan.  Eventually, wooden dowels were used in place of sawdust, though many folks still prefer the latter. 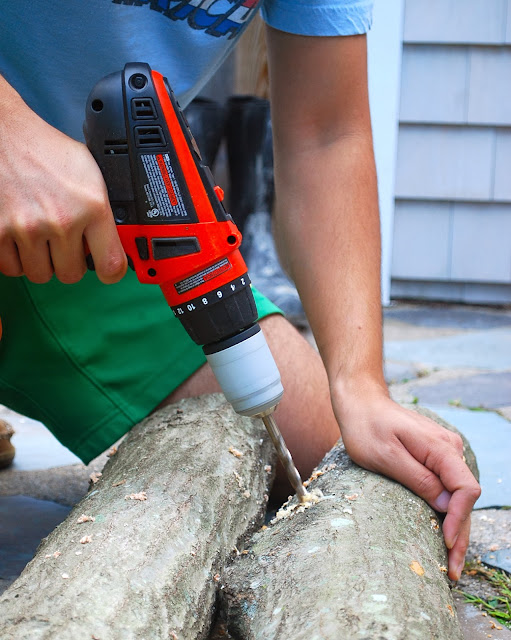 The logs are drilled to the same depth and width as the mushroom plugs (this is case, 5/16" wide by 1" deep). Holes are spaced 4 inches apart in a diamond pattern.

The method for growing shiitake mushrooms on logs is pretty straight forward.  While generally any kind of hardwood would suffice, shiitakes are said to grow particularly well on oak.  Back in September, my brother-in-law Paul allowed me to cut down one of the many small oak  trees on his property for this mushroom growing endeavor.  (Actually,  he cut down the tree for me.)  Using freshly cut logs is best since older logs may already harbor other fungi or may be too dry to facilitate colonization.  While trees with a trunk diameter of 4 - 6 inches are best, larger diameter logs can still be used, though it may take longer for the fungi to fully colonize and start fruiting.  The logs are then cut to 3 - 4 feet lengths for easier handling.

Once cut, some sources suggest leaving the logs to sit for about two weeks in a shady location and away from direct contact with the ground.  This offers time for the anti-fungal compounds naturally found in the wood to break down, facilitating colonization.  Other sources, however, recommend inoculating the logs as soon as possible after the tree is cut down.  In either case, logs will remain fresh for several months if kept off the ground and watered during dry periods.  I decided to let my logs sit for a week or two before inoculating. 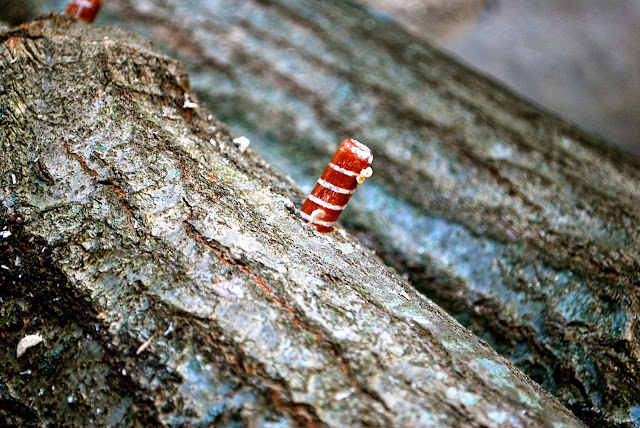 The white spiral on these wooden dowels indicate that they have been sufficiently colonized.

After receiving my plug spawn (hardwood dowels inoculated with the fungi) in the mail, they were kept sealed in the refrigerator.  Storing them this way keeps them viable for up to 6 months.  A couple days prior to inoculating, I took them out of the fridge to get them acclimated their new environment. 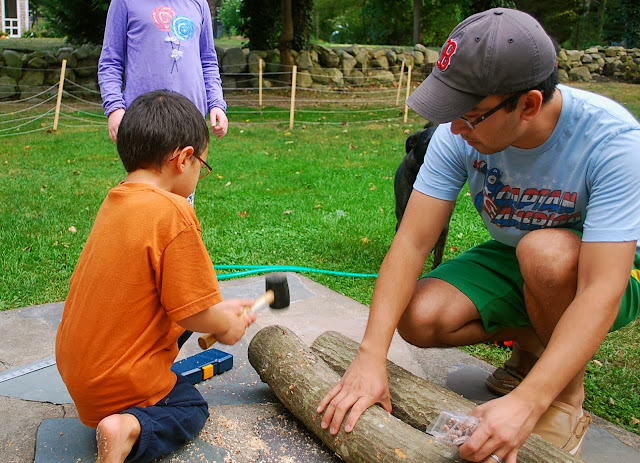 A rubber mallet is then used to drive each plug into the log.

On inoculation day, we began by drilling holes about 1" deep into each log using a 5/16" drill bit (essentially, the same diameter and length of the plugs).  These holes were arranged about 4 inches apart in a diamond-shaped pattern all along the surface of the log.  Prior to drilling, I'd used a ruler and black marker to map out the holes on each log.  Doing so not only made the drilling process more precise and efficient, but also enabled me to determine how many plugs I would need for each log.  Using a rubber mallet, we then drove a plug into each hole so that it was flush with the surface of the log.  (Did I mention this was a kid friendly activity?) 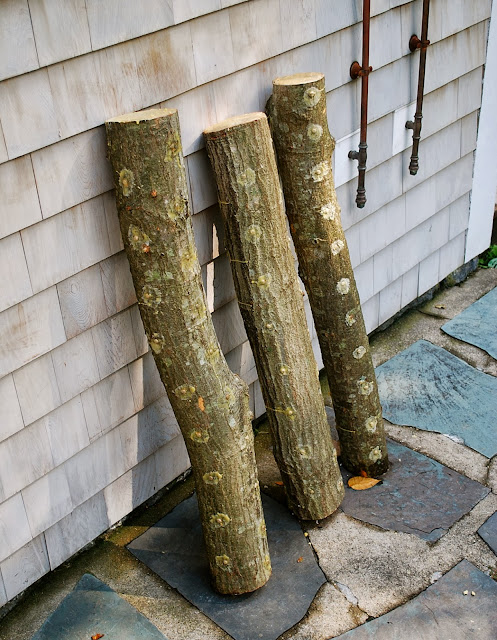 These are three among at least a dozen logs I've inoculated with shiitake and oyster mushroom spawn.

Once the logs are inoculated, the individual plugs are then covered with a thin layer of melted bee's wax.  The cut ends of the logs were sealed as well.   This helps to prevent the logs from drying out and protect the mycelium as it begins to colonize the wood.  Currently, I have about 13 logs that I've inoculated with either shiitake or oyster mushroom spawn (never on the same log).  These logs now lean against a wooden fence in a shady spot behind our barn.  Generally, I'll water the logs about every few days if the weather is dry.  But now that we are well into fall, I don't think that this will be necessary again until sometime during the spring.

While it is possible to cut down and inoculate mushroom logs year around, they say that the best time to do so is in late winter or early spring when sap is flowing up the tree trunk (more sap equals more food for the fungi).  Logs inoculated during the winter months should be stored in a protected area (like a garage) since freezing temperatures will slow the colonization process and greatly delay mushroom production.  In my case, I'm hopeful that I've inoculated my logs early enough so that the mycelium has had enough time to settle in before the harsh winter months arrive.  Only time will tell I guess.

If all goes well, my logs should start fruiting within 9 months to a year (depending on the species of fungi) and the logs themselves should remain fruitful for at least several years. Of course I will be sharing my results as time progresses.
Posted by Thomas Generazio at 10:59 PM

Email ThisBlogThis!Share to TwitterShare to FacebookShare to Pinterest
Labels: mushrooms