Starting a Job You Can't Finish

When we bought our new home, there was a low-lying deck that ran along one side of our farmhouse.  It was in desperate need of fresh paint but otherwise was in good condition.  Unfortunately for us, it really didn't suite the space it occupied on our property.  Nor did it mesh well with the rustic charm of our 19th century farmhouse.  On top of this, the previous owners had closed off the entryway that had led directly onto the deck when they enlarged and remodeled our kitchen.  As a result, in order to get to it, you had go out the backdoor and walk around to this side of the house.  It didn't take us long to realize that the deck would eventually have to go, although a project like this remained relatively low on my list of home and gardening projects to take on in the near future.


Fast forward to this past October, my husband woke up one Saturday morning, took one look at the deck and decided that it would be a good day to tear it down.  Being the ever supportive spouse, I gave him a skeptical look and asked if he was sure.  He said yes and confidently stated that it would probably only take him about an hour to get the job done.  I grinned and wished him well as I had my own chores to do.

Four grueling hours later, the deck was finally gone.  In the end, it took two husbands (mine and our axe wielding neighbor Bryan) and agreat deal of sweat to demolish the darn thing.  Apparently this deck was built to withstand not only the test of time, but also two grown men with large crowbars. 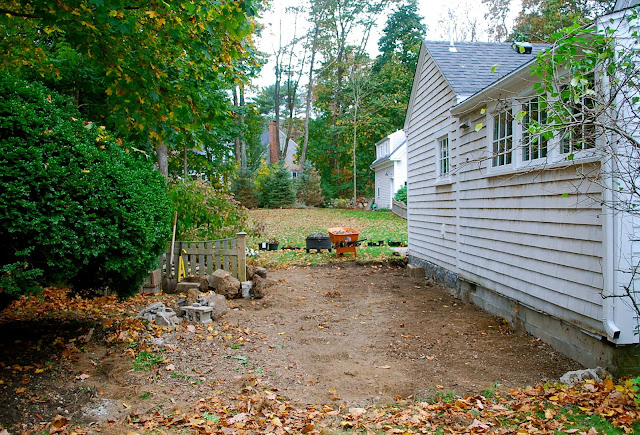 When the dust finally settled, we were left with a lot of debris and a blank canvas of sorts.  I have to admit that I was glad to see the deck gone.  On the other hand, it didn't take me very long to ask the question - So now what?  In retrospect, it would have been nice if we had a plan already in place for this space or at least a basic idea of what we wanted.  Instead, I've now accepted the fact that this area will most likely remain a "work in progress" for at least the next few years. 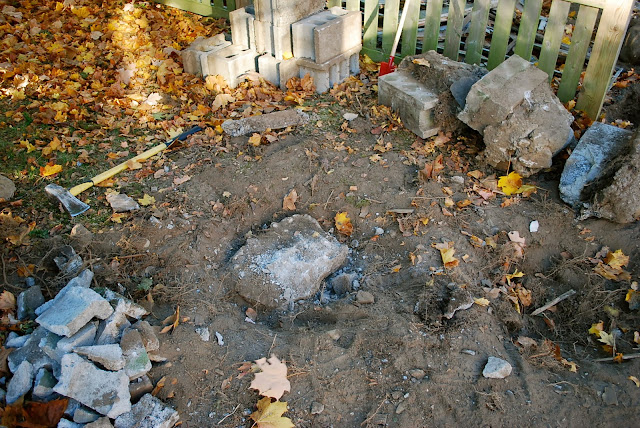 Note to self - It's never a good idea to dig a big hole, throw a bunch of rocks in, fill it with cement, and then cap it all off with a 40lb concrete block. There has be a better way to create footings for a deck that only sits a foot above the ground.  Unfortunately for us, we were left with twelve of these beauties, several of which remain unmoved for the ages.

Since the deck was removed, I did find the time to create a basic planting bed that runs along this side of the house.  Eventually, I think I'd like to install a very wide and natural looking flagstone walkway, laden with creeping thyme, evergreen shrubs and flowering perennials, which would then lead to a large rose arbor that opens up to the backyard.  Until then, there will be plenty of dirt and mud here to knock about.
Posted by Thomas Generazio at 10:28 PM