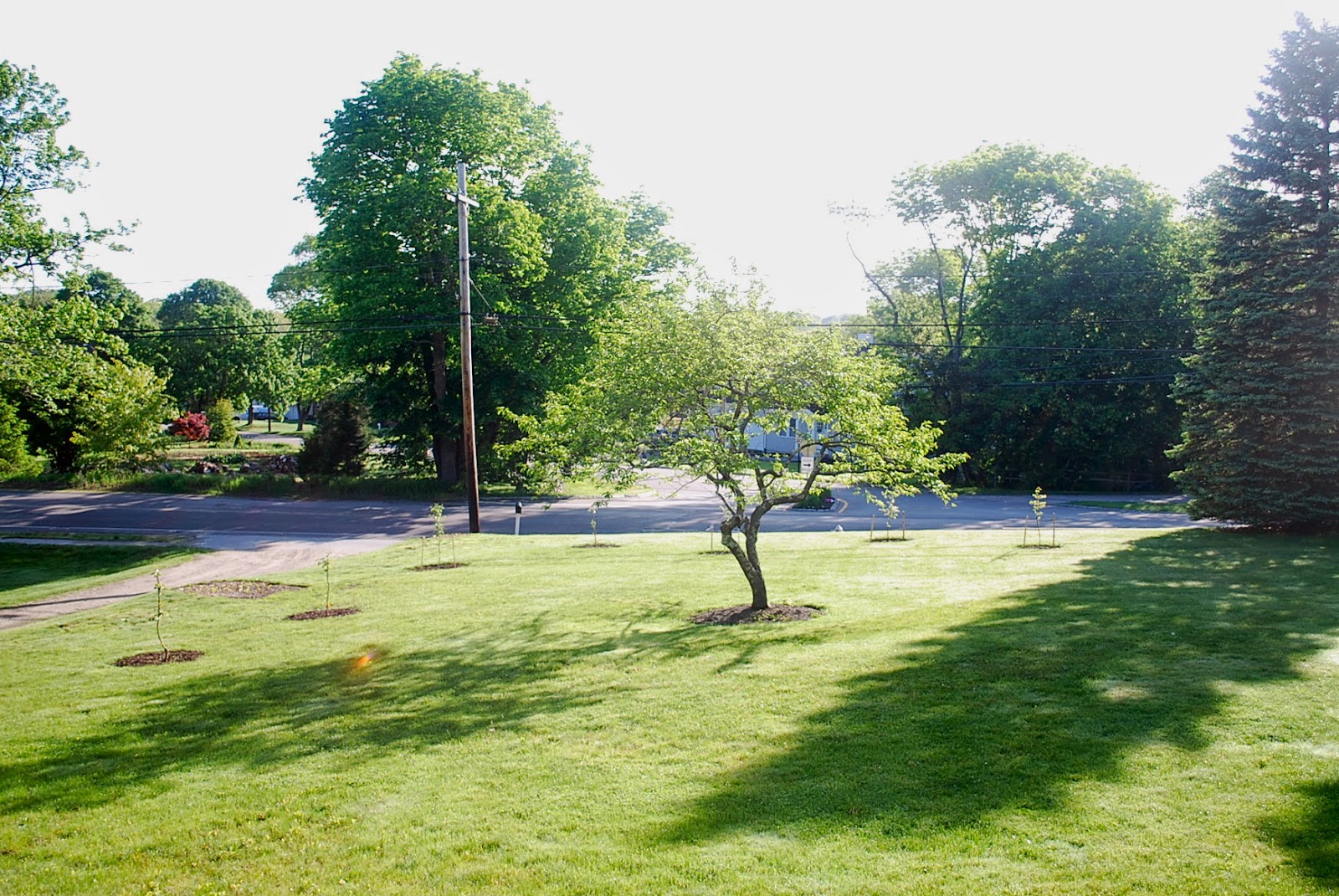 I must admit that I haven't paid too much attention to our fruit trees lately.  Earlier in May when they began to leaf out, I had some issues with pests, including cabbage whites eating the young leaves.  My sour cherry tree was hardest hit and continues to suffer a bit.  But for the most part, my trees are looking pretty good now.  I sprayed neem oil soon after I realized the trees were under attack but haven't done anything else since.  I may spray again soon just to be on the safe side. 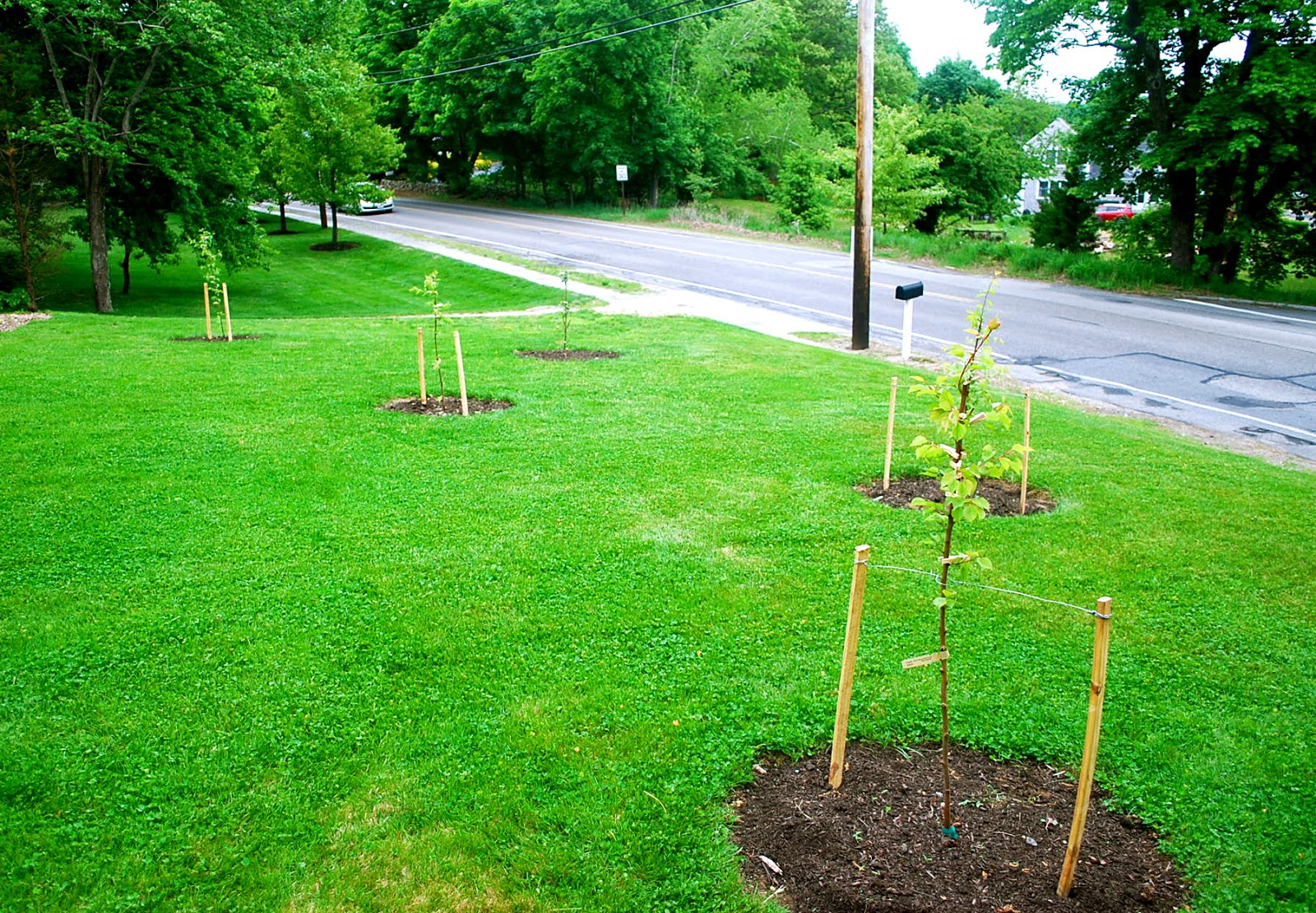 This past week, I finally got around to staking some of my fruit trees.  I didn't bother staking my Asian pear trees as they are growing on rather robust rootstocks and the trunks are thick and firm. There's one school of thought that believes that you should avoid staking trees as much as possible or provide only a minimal amount of support - the rationale being that unsupported trees tend to develop stronger trunks and root systems than supported ones.  I kept this theory in mind as I went to work. 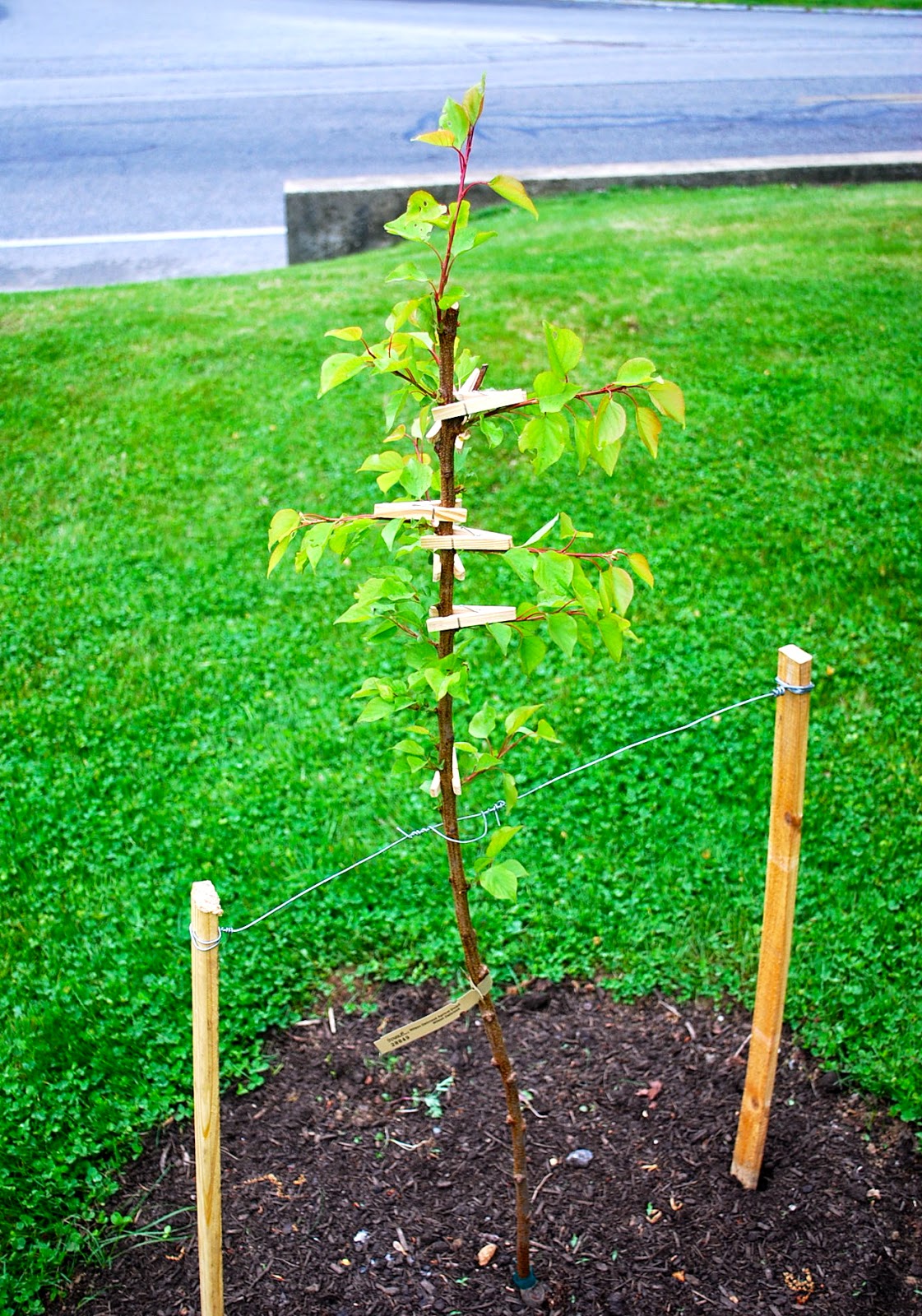 I have to admit that I don't know too much about staking fruit trees.  In the end, I decided to use items that I had lying around the house.  I started by driving two wooden stakes about a foot into the ground on opposite sides of each trees.  Then I threaded some 9 gauge wire through holes I'd pre-drilled near the top of each stake and wounded the excess wire around each stake to increase the tension and secure the line.  While I was at it, I used clothespins to spread the young branches on each tree. (A word of advice - Asian pear trees have fragile shoots that tend to grow very upright.  I nearly had a heart attack when I accidentally snapped off a very nice-looking one.)  I'm growing all of my young fruit trees as central leader trees, though one of my Asian pears is insisting on being a multileader tree. 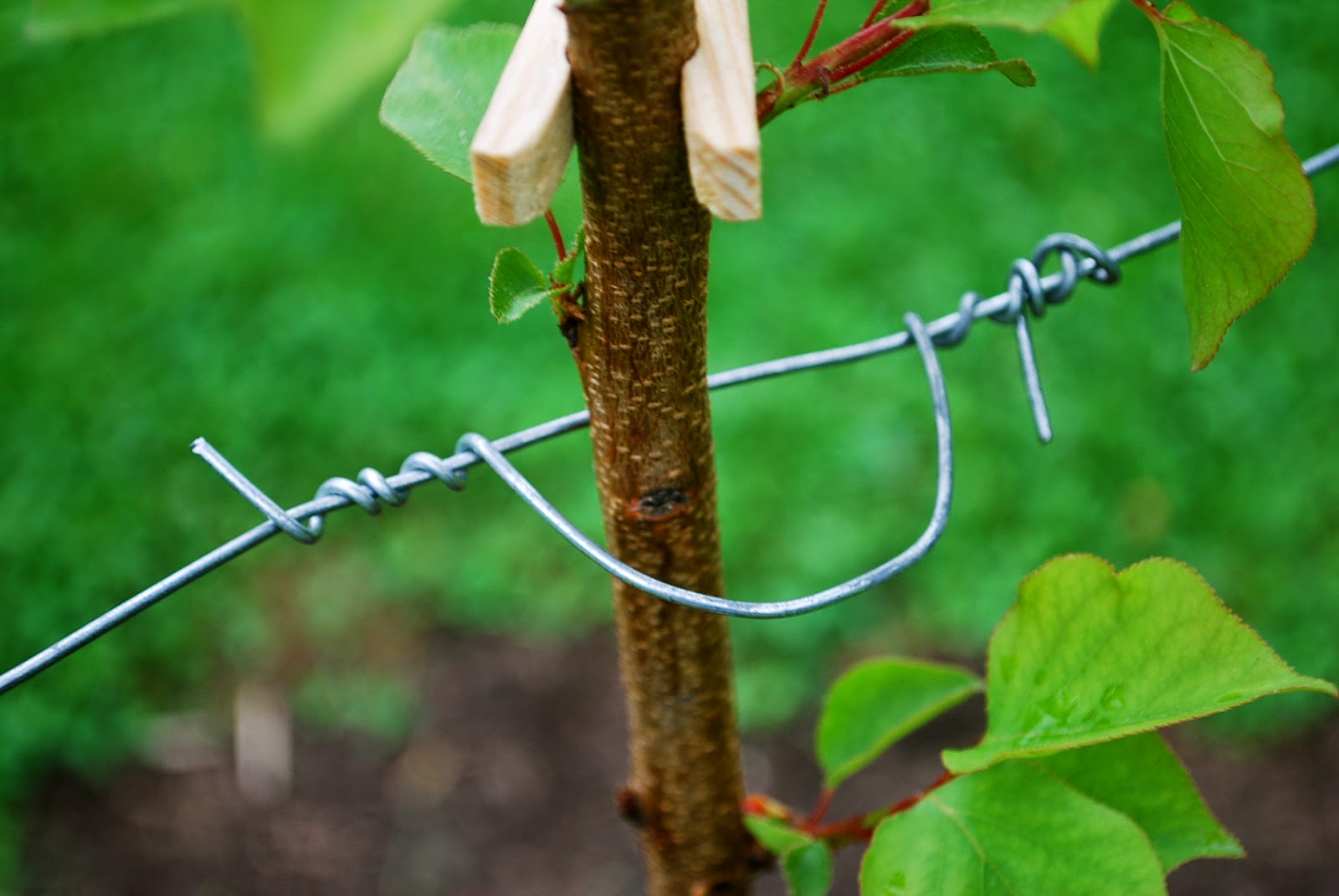 I finished things up by coiling a piece of wire around the line to create a half-ring around the trunk.  By the time the trunk grows thick enough to fill this space, the tree should be strong enough to support itself.  It was a fairly windy day when I did this and so far, the trees seem to be adequately supported. 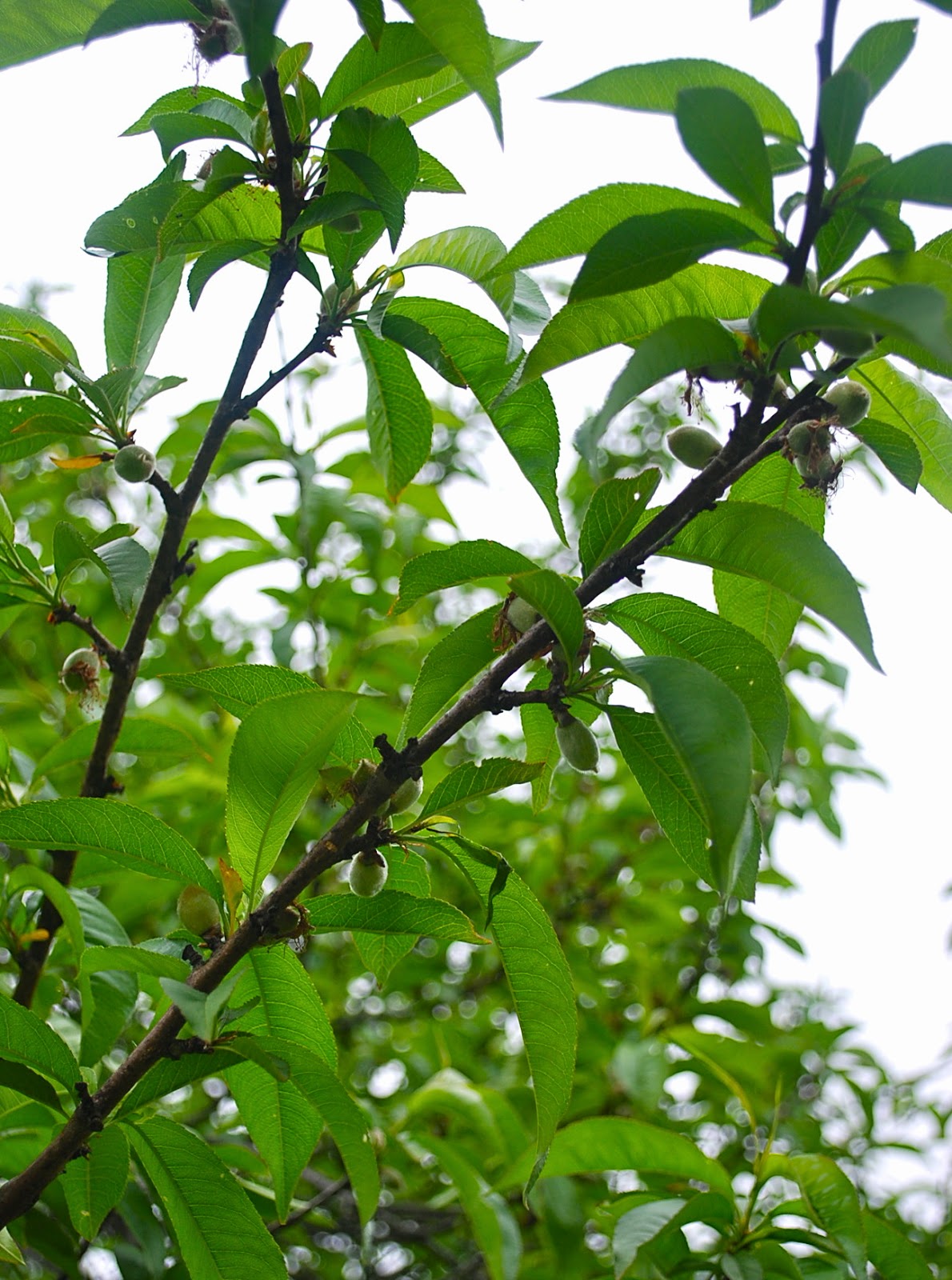 As I was finishing up this project, I noticed that our old peach tree was covered with tiny young peaches.  There must have been hundreds.  I guess my theory about this tree being a biennial bearer may turn out to be wrong after all - at least that's what I'm hoping.  When we moved in latest summer, the interior of this tree was filled with dead branches.  I swiftly pruned all of them out.  Then earlier this year, I removed a major limb growing towards the middle of the tree in order to allow more light to reach its center.  Hopefully, the tree responds favorably to this treatment and provides us with plenty of peaches this year.
Posted by Thomas Generazio at 9:13 PM