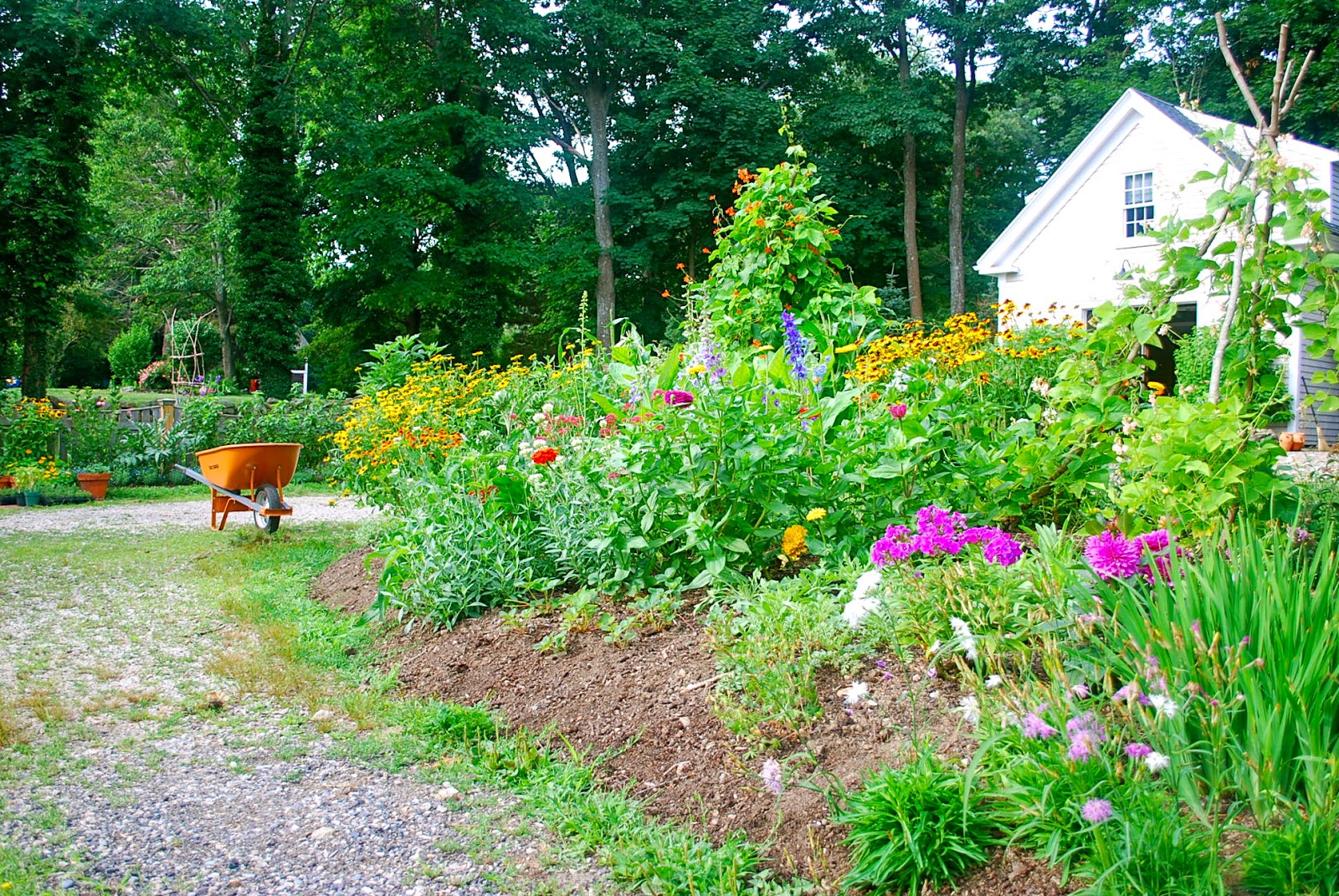 As the summer season approaches its zenith, there's so much to do around the garden.  Plants need to be staked, spent flowers need to be deadheaded, veggies need to be picked, cuttings need to be taken for next year's plants, and seeds need to be sown for the fall garden.  And then there are the weeds, which in the middle of my garden beds have been drowned out by the lushness of our ornamental plants.  Those along the edges of the borders, on the other hand, have seemingly thrived mainly due to my lack of attention. 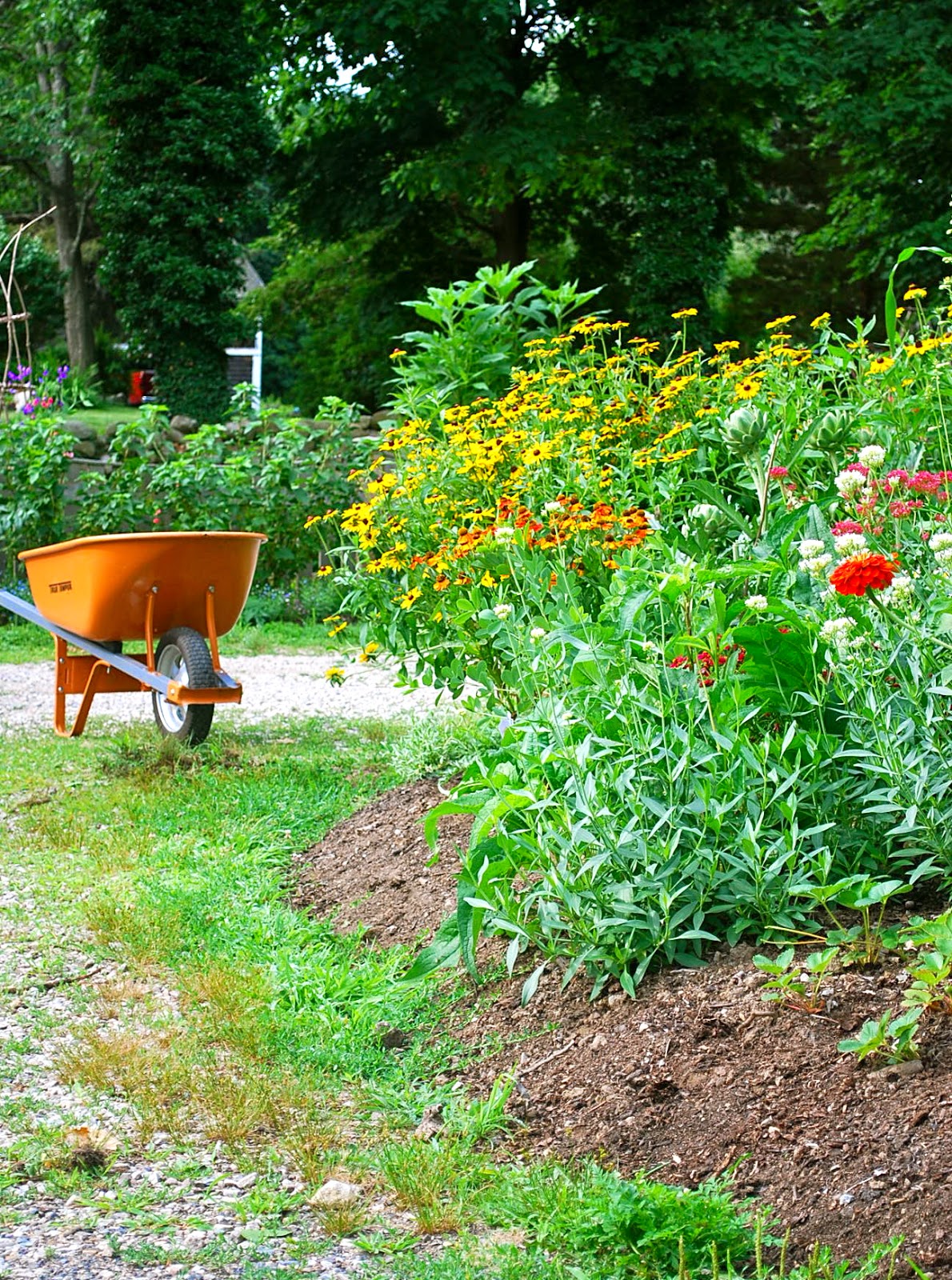 Normally the weeds within our driveway wouldn't be so aggressive as they are now.  But when you add a new source of nutrients to the area (like the soil mix I added to the circle bed), the plants you don't want to grow seem to benefit as much as the plants you do want to grow. 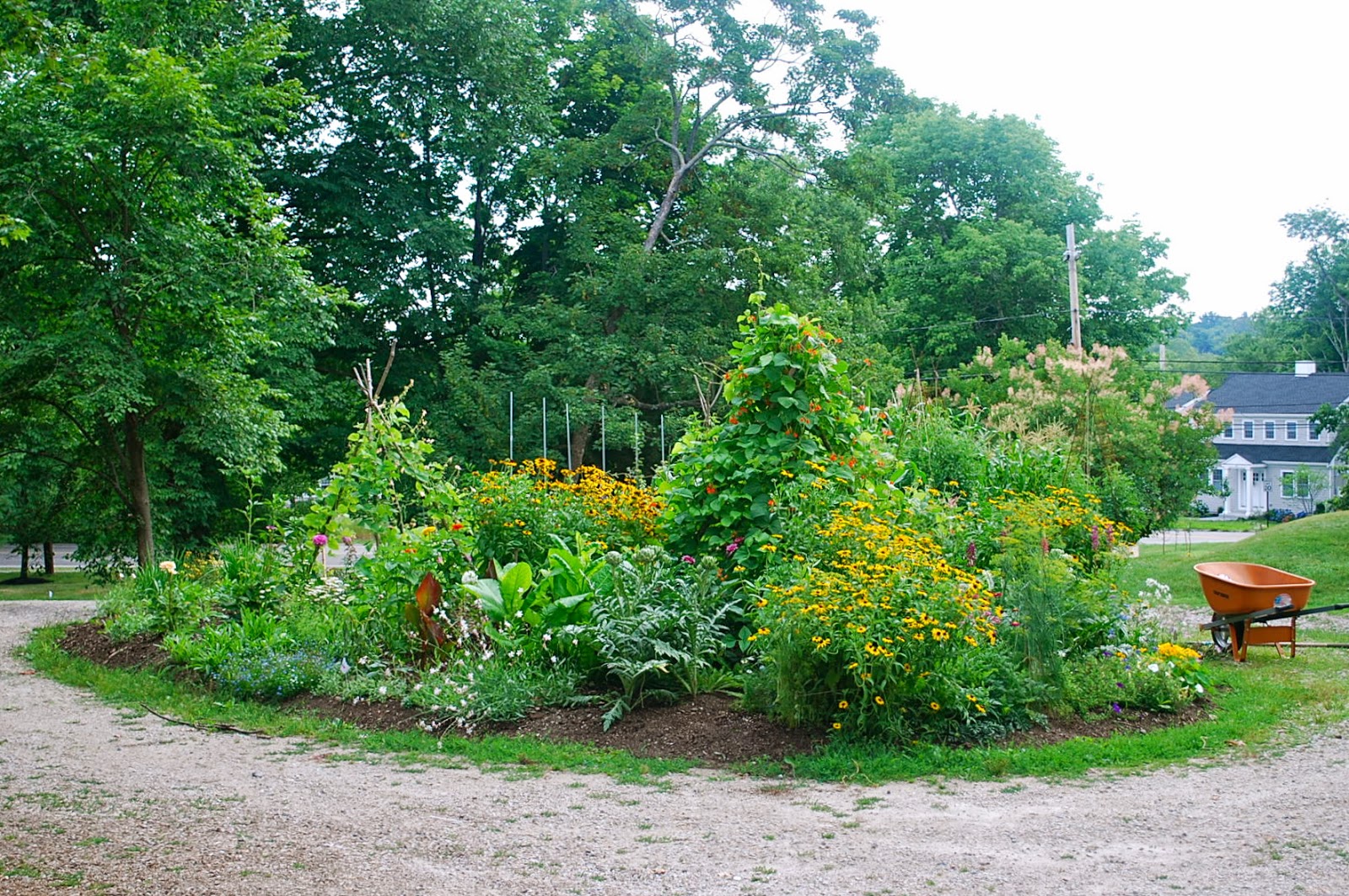 The neat edges that I'd worked so hard to achieve earlier this spring were now lost in a sea of green carpeting.  A couple of weekends ago, I decided that enough was enough and that something had to be done about it. 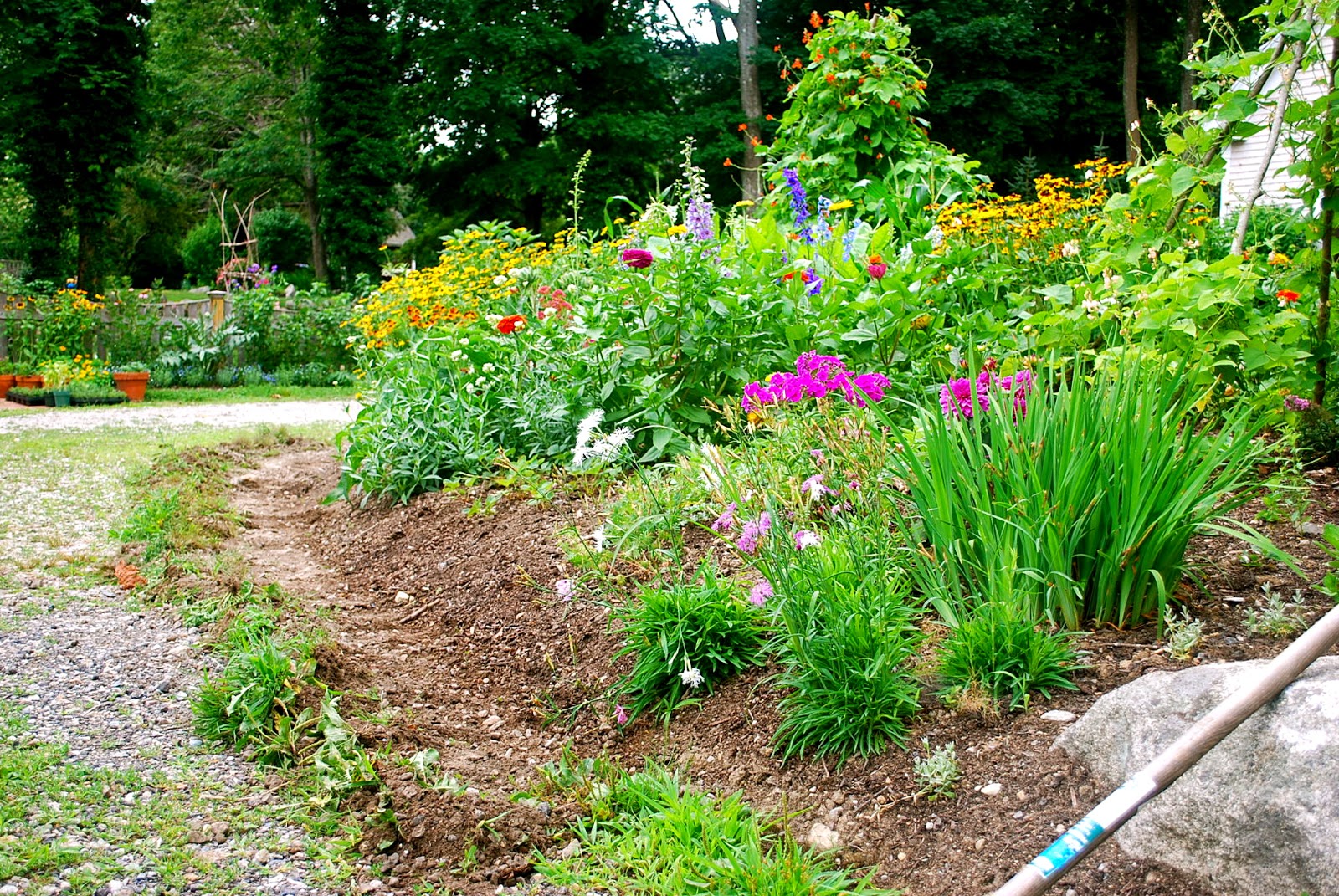 So out came the hoe.  It took me the better part of a day to remove all of the crab grass and other weeds that encroached on the circle bed.  By the time I was done, I had a couple of good-sized blisters on my hands to show for it. 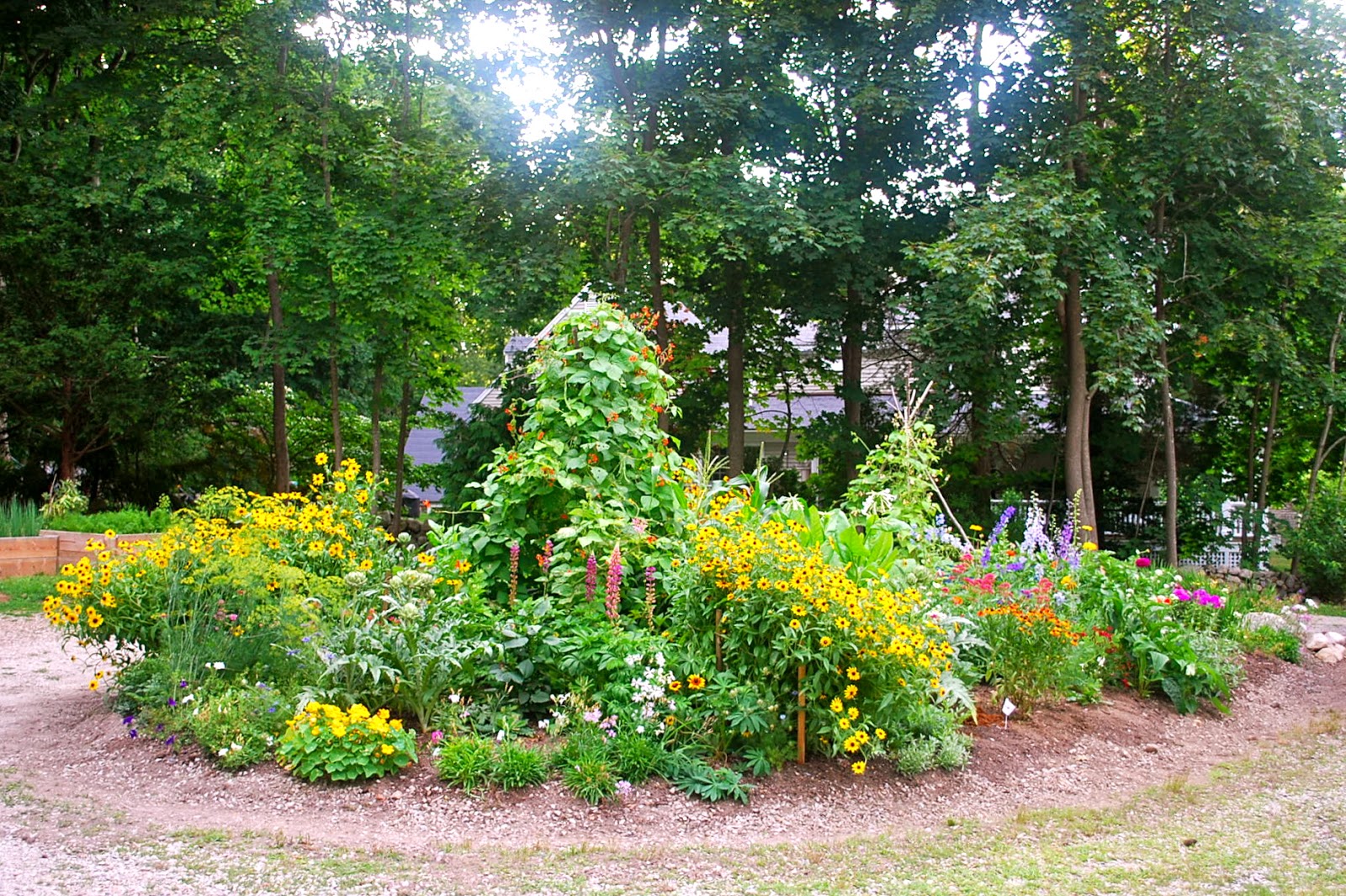 After the weeds were carted away, I raked along the border to smooth out the edge.  At this point, I was willing to call this project done.  But that was not in the cards.

When I first devised the circle garden, I had in mind that I would line it with cobblestone.  What I didn't anticipate was that twelve yards of soil mix would be added to it, resulting in a steep slope all along the edges touching the driveway.  This made planting along the edge rather difficult and resulted in a look that was less than neat.  Eventually, I decided that cobblestone as an edging material would not work and that I would need something a bit more substantial to line the bed.  What I settled on was a low-lying wall that would help retain the soil and allow me to plant to the very edge of the bed. 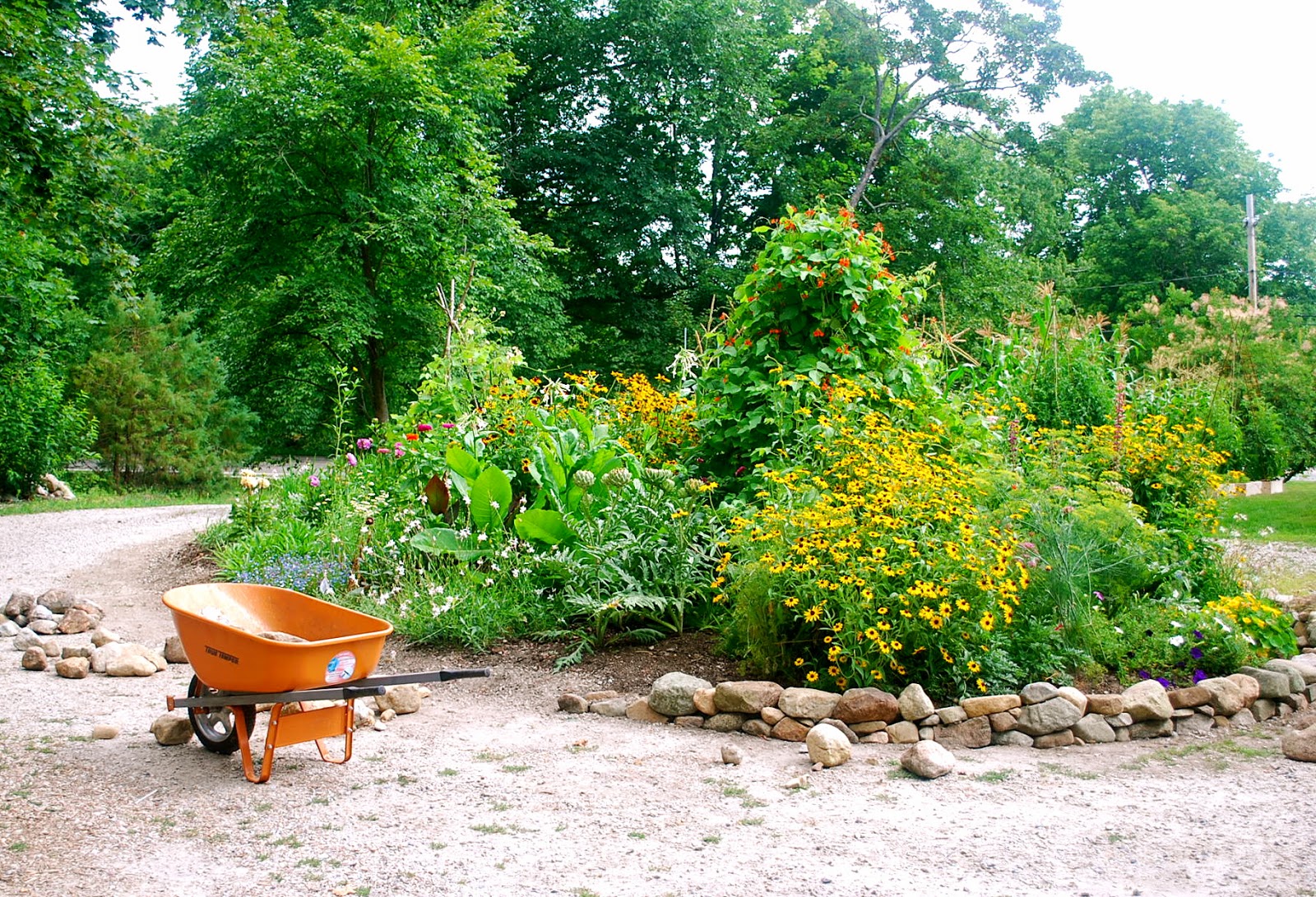 Earlier this summer, we visited several local quarries to browse for landscaping stones.  I've always loved the look of a dry-stack wall made of flat stones.  Unfortunately, I couldn't justify spending a lot of money on landscaping stones when there are other more pressing home renovation projects that need to get done within the next year or two (like the entire upstairs of our farmhouse).  In the end, I decided to use what we had on hand and what was FREE. 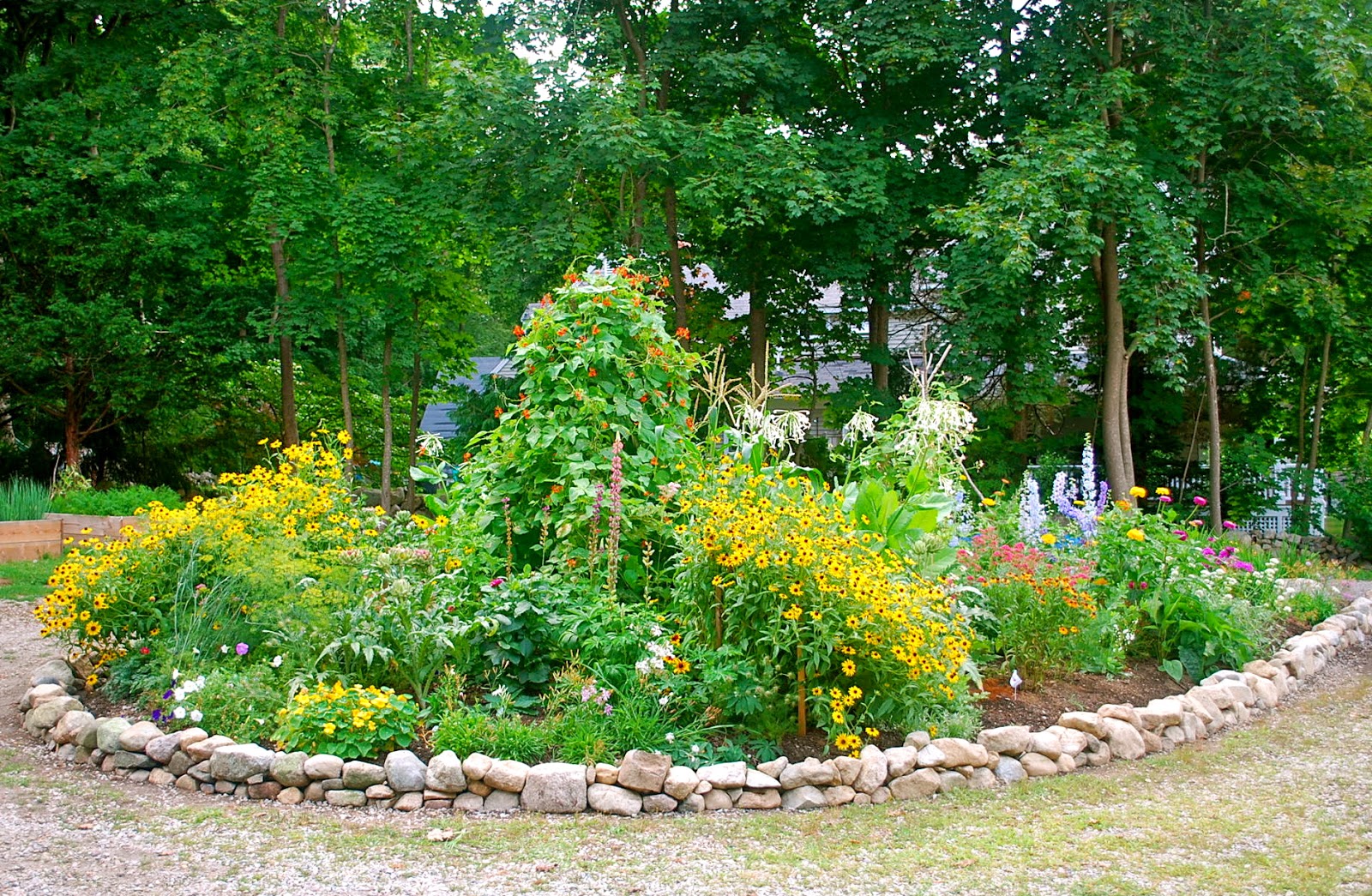 When the prior owners replaced the septic system a few years ago and installed a new leach field, the excavation left a big mound of rocks and dirt to one side of our front lawn.  This past weekend, I dug into the mound and collected as many big rocks as I could.  I also scavenged in the woods behind our home.  In the end, I had enough to create a low-lying wall all around the circle bed. 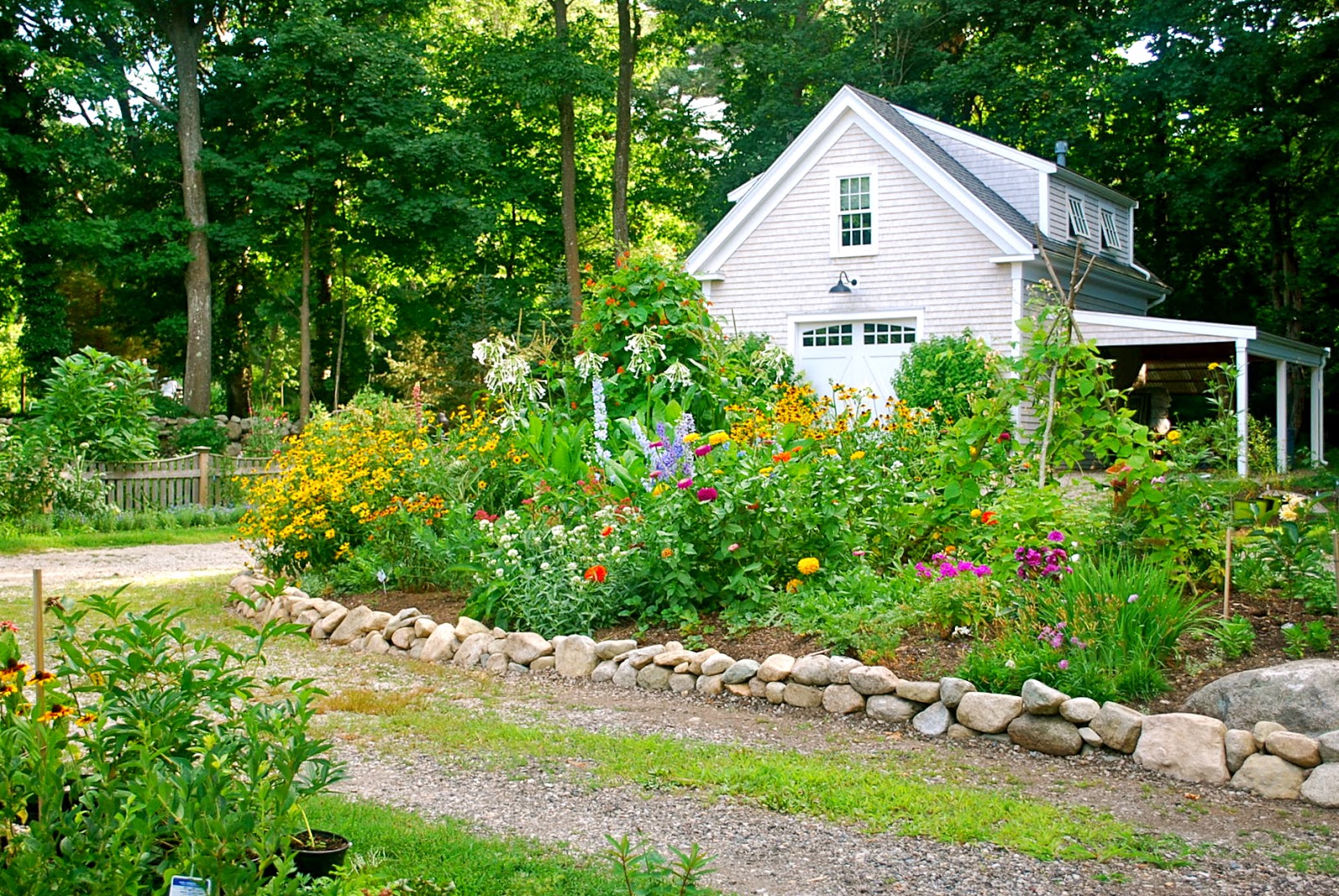 I know next to nothing about building a wall so the end result wasn't perfect.  But then again, I really like the rough and rustic look of this wall.  It seems to fit our surroundings well since we used materials derived from our own land.  And best of all, I was able to accomplish this project without spending a single dime.  Soon, I'll order more soil mix to fill the backside of this wall.  Eventually, I'd also like to add a fresh layer of gravel to the driveway.  But for now, I can sit back and enjoy the circle bed again.
Posted by Thomas Generazio at 2:03 PM