When we moved back to Massachusetts last year, one of the first things I did was to go out and buy three young fig trees from a local family-run nursery specializing in old Italian varieties.  The three varieties I chose were Italian Honey, Black Triana and Paradiso.  Two of these varieties I'd grown previously with moderate success.  Unfortunately, they ultimately proved no match for the harsh winters of Vermont.  Now that we live in a marginally more hospitable climate zone, I thought I'd give it another go.

Growing fig trees successfully in Zone 6A New England is never a sure thing.  Most fig tree varieties will not survive our winters unprotected.  When planted outside, there's also a good chance that the fig tree will die back to the ground (if they don't die outright), which is mainly why I've chosen to grow mine in large pots.  By November, I'll move the dormant trees indoors to an unheated crawl space underneath our house, which stays just above freezing all winter long.

Another challenge to growing fig trees in our part of the world is our short and often cool (i.e. non-Mediterranean) summers. Even when our trees produce fruit, there's no guarantee that they will ripen in time before the fall weather sets in.  And when they don't, it can be incredibly disappointing. So far, I've had no problems with my Italian Honey figs ripening on time (about early to mid-September).  Unfortunately, Black Triana and Paradiso in years past have proven to be late producers (bearing ripe fruit as late as November).  Even if we had a bright space indoors to prolong their growing season, chances are the quality of fruit produced would be mediocre at best.  (I learned this a couple of years ago.) Which leaves us with only one option - we must encourage our trees to ripen their fruit before Autumn sets in. 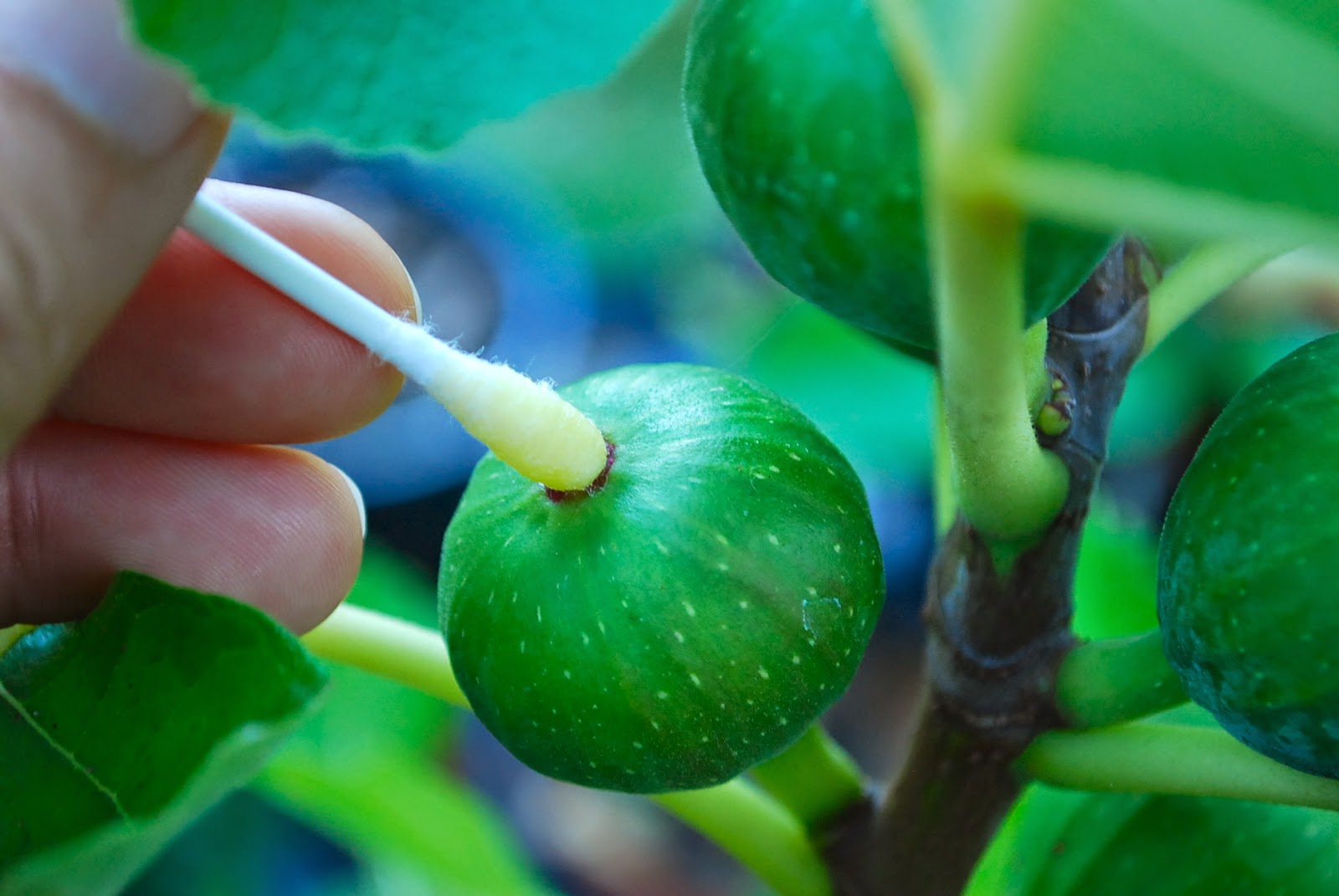 Not too long ago, I learned about oleification - a practice employed by growers as early as the third century BC to accelerate the ripening of figs.  The process involves applying a small amount of a variety of oils to the eye of an unripe fig.  Within 5 days of application, if all goes well, the fig should begin to ripen. Last Thursday, I decide to test this technique.  Using a cotton swab, I dabbed a small amount of olive oil to the eye of an unripe fruit on my Black Triana fig tree, being careful not to get the oil on any other part of the fruit.  I chose the one furthest away from the growing tip of the tree, as these generally ripen first.  One added note - from what I've read, it's also very important to induce ripening at the appropriate time, specifically when the eye of the unripe fig is pink (at least in varieties with dark or brightly colored interiors).  Apply the oil too early and the unripe fruit will simply fall off the tree.

I waited a few days and was a bit discouraged when I didn't notice any change.  Then on the fifth day, I came home from work to discover that the treated fig had swelled to twice its previous size seemingly overnight and started to darken in color - sure signs that it was beginning to ripen (bottom fig pictured above).  Today, I went ahead and treated three more figs.  With some luck, we will be able to harvest all of them before the first frost.  I am further encouraged by the fact that we are expecting daytime temperatures to reach 80 degrees F again this weekend. 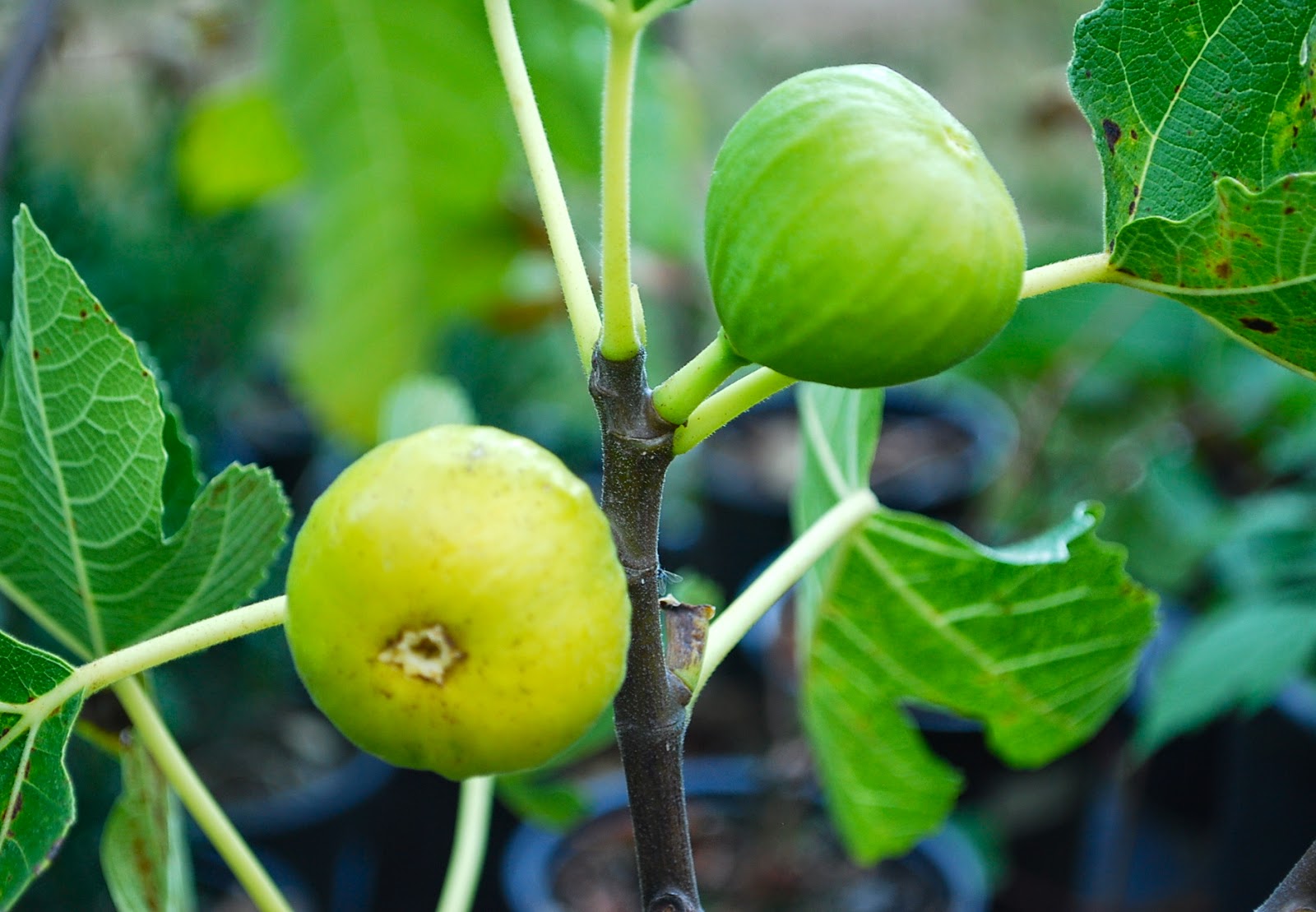 As I stated, our Italian Honey figs are ripening naturally and on time this year.  I really love the taste of this fig and would highly recommend it.  We have two left and they will surely be savored by me and my son.  So far, we've been pretty good about sharing.
Posted by Thomas Generazio at 11:01 PM

Email ThisBlogThis!Share to TwitterShare to FacebookShare to Pinterest
Labels: figs