A Garden Path In Progress 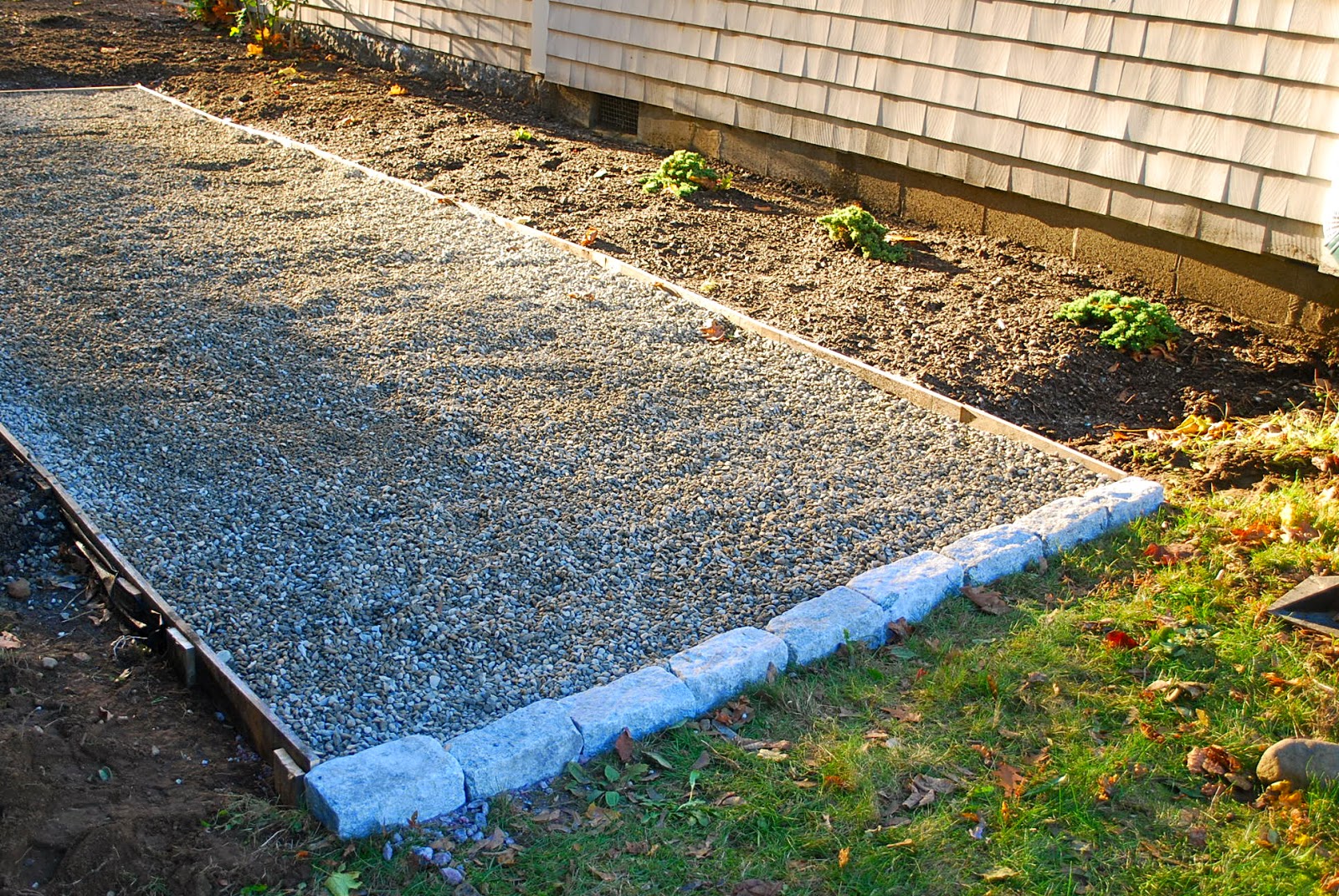 During the next few weeks, I'll be posting about some of the gardening/landscaping projects I'd started last fall but never got around to writing about (or finishing for that matter).  At this point I've come to accept the fact that the garden(s) will be a work in progress for at least the next few years.  Though I'm truly of the opinion that a 'finished' garden is a fallacy, I do believe that I'll eventually get to a point when I won't be digging up great big patches of sod or shoveling through heaping piles of pea gravel.  I'll welcome that day when it comes, but for now, I'll try to enjoy the sense of accomplishment that follows a weekend's worth of backbreaking physical labor.

In this post, I'll be highlighting probably the biggest project of this fall - installing a garden path that runs along one side of our house.  Eventually, this path will lead from the front lawn to our future backyard patio/outdoor living space.  In this particular area, there used to be an ill-conceived low-lying deck, which was unceremoniously demolished shortly after we moved in. (You can read about it here.)  After the rumble was carted away, what remained was a large patch of dirt, which then turned into a large patch of weeds and at times a large pile of brush destined for the burn pile.  A year later, I decided that enough was enough and that something had to be done to make this area less of an eyesore. Over the span of two weekends, I went to work on installing a new garden walkway and two new flower bed. I won't bore you will the details, but here are a few photos of the project from beginning to end (or should I say, where it is now). 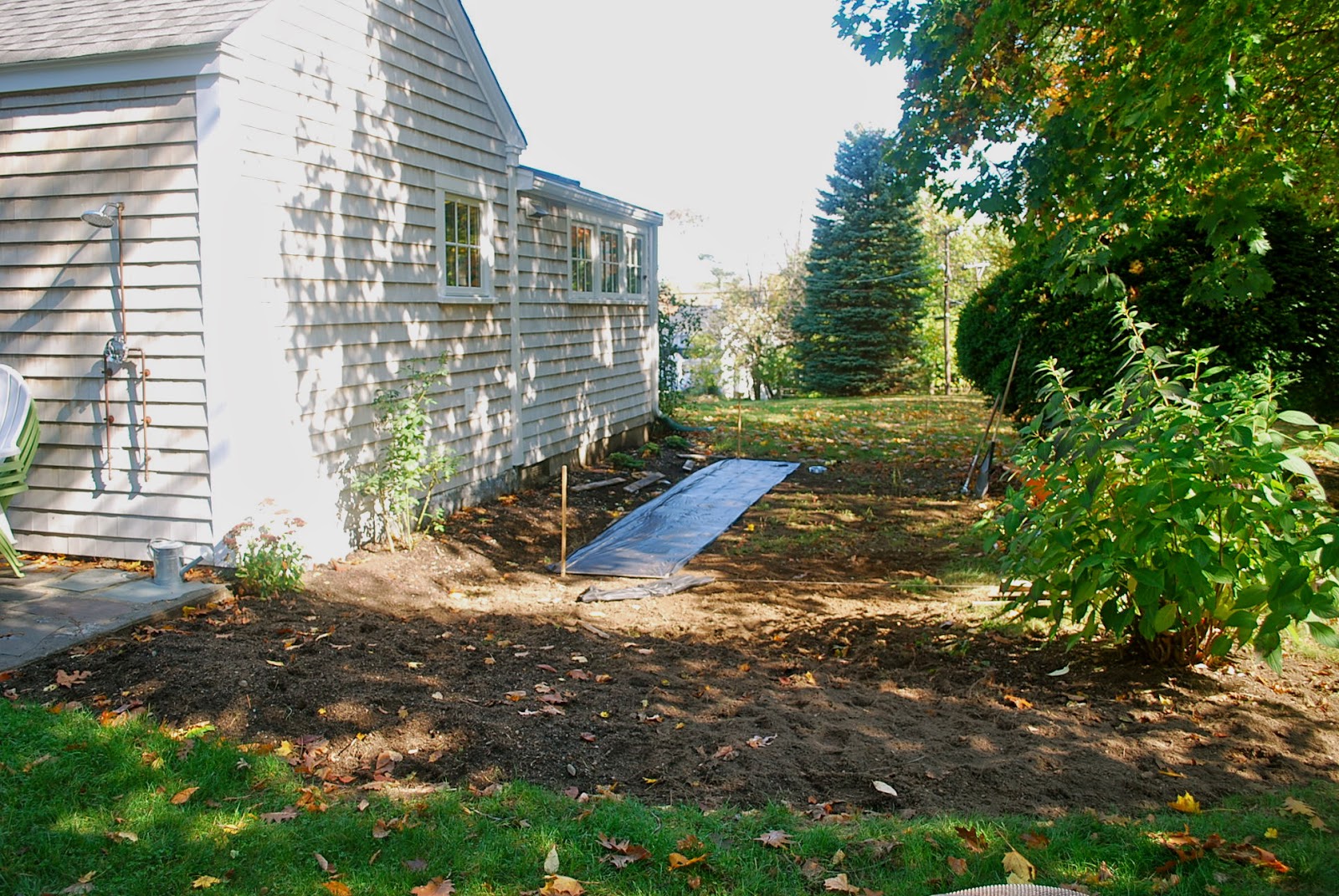 A new flower bed was dug.  Instead of a straight shot from the front lawn to the back yard, I wanted to create a semi-windy path. 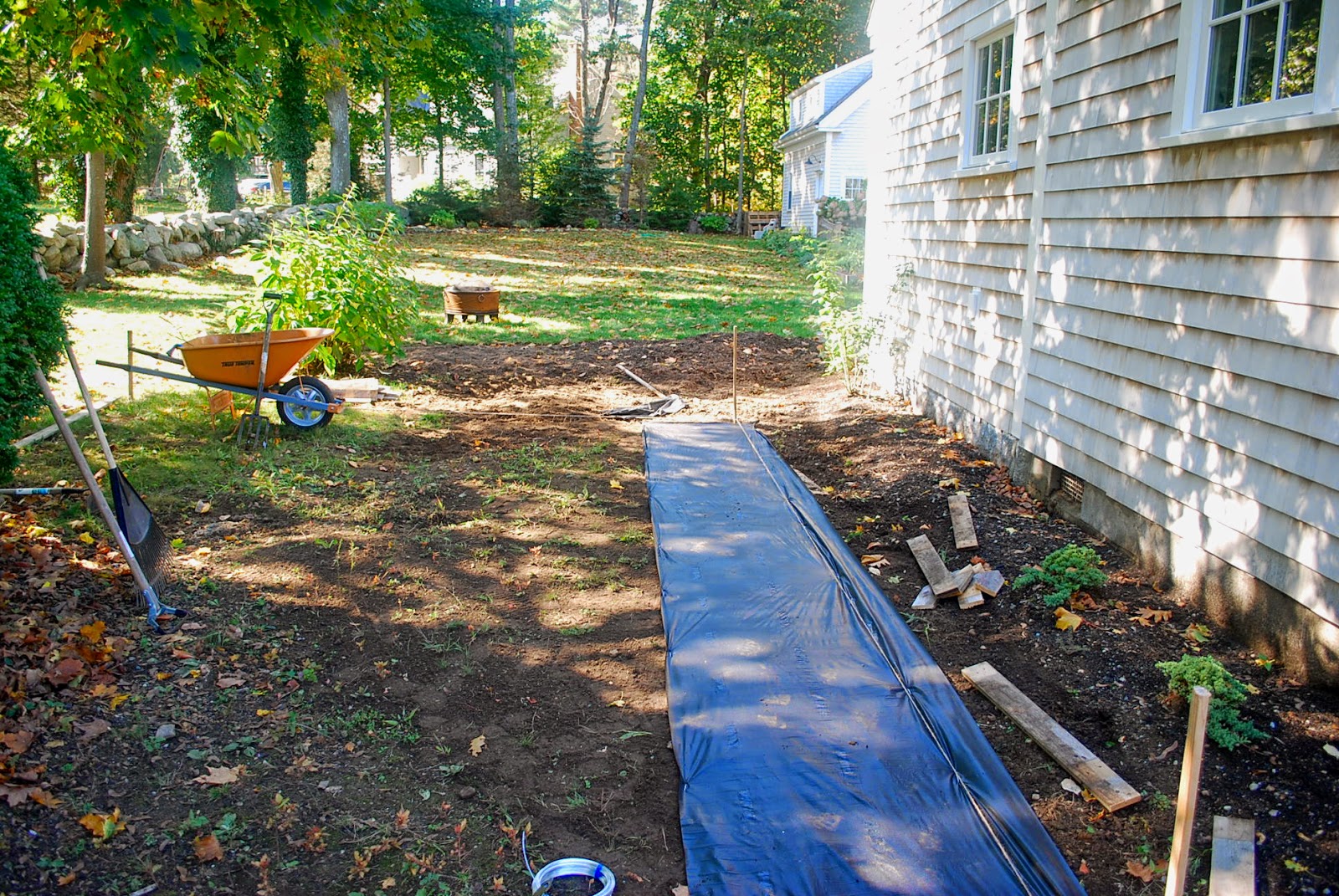 I tried to clean up the area as much as I could before the weed barrier went down.  Thankfully, there was not much top soil here to dig up.  The ground was hard and compact. 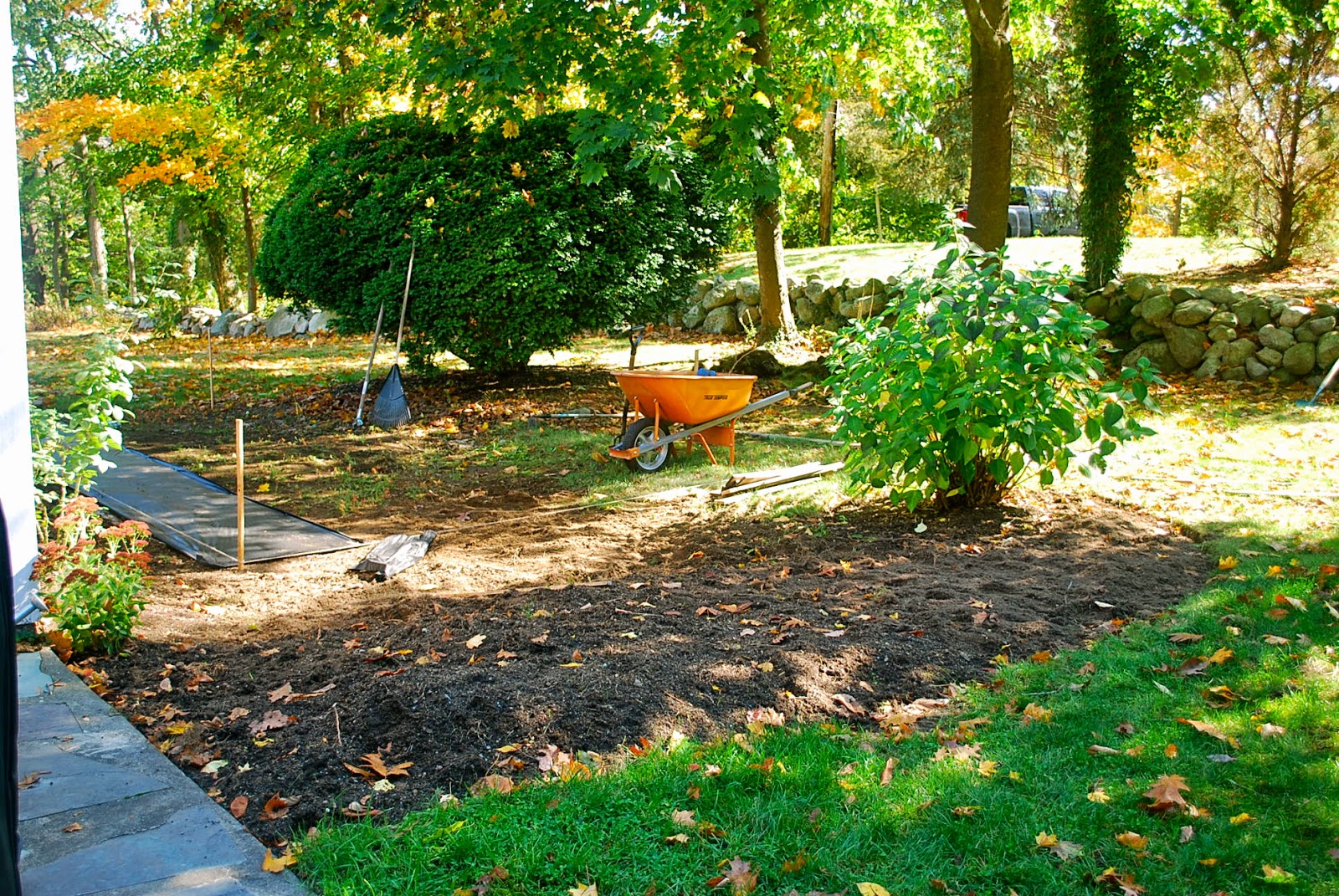 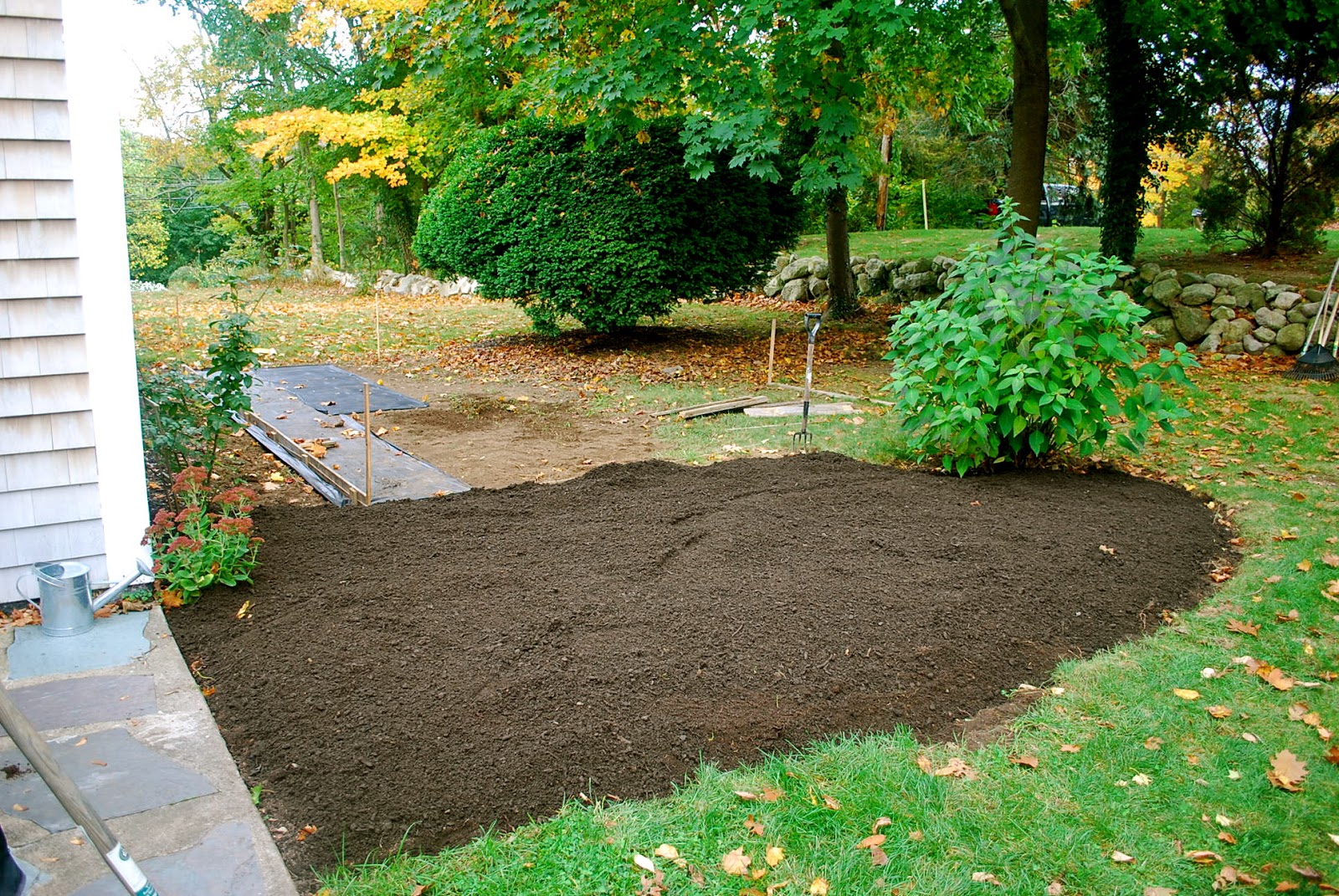 A layer of fresh soil mix was spread over the new garden bed. 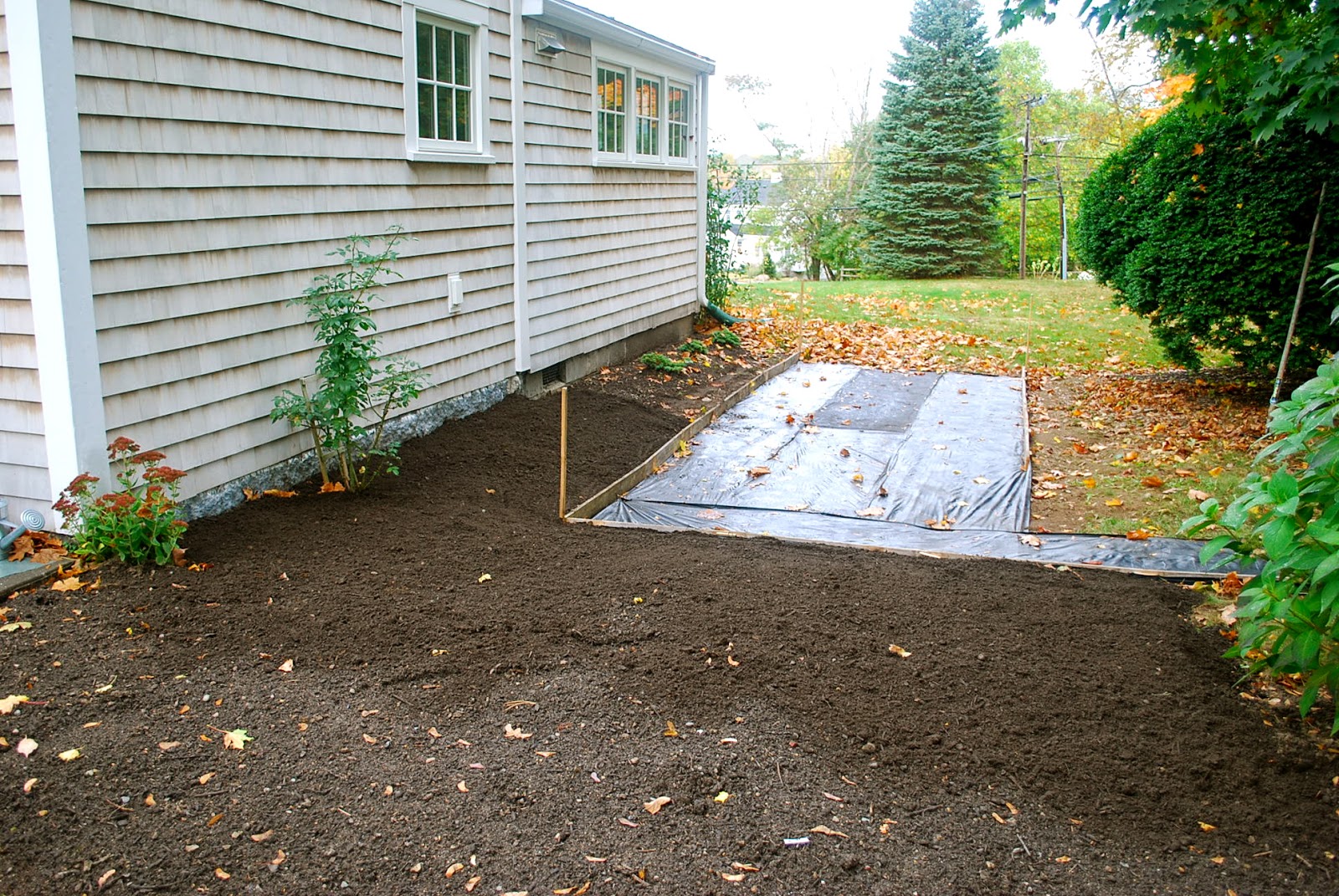 When we pulled out a part of the backyard fence, I saved all of the treated wood as it was in very good condition.  I used some of the wood to line the path and to give it a clean straight edge. The path is fairly wide (7 ft) to accommodate large landscaping equipment like a commercial lawnmower. 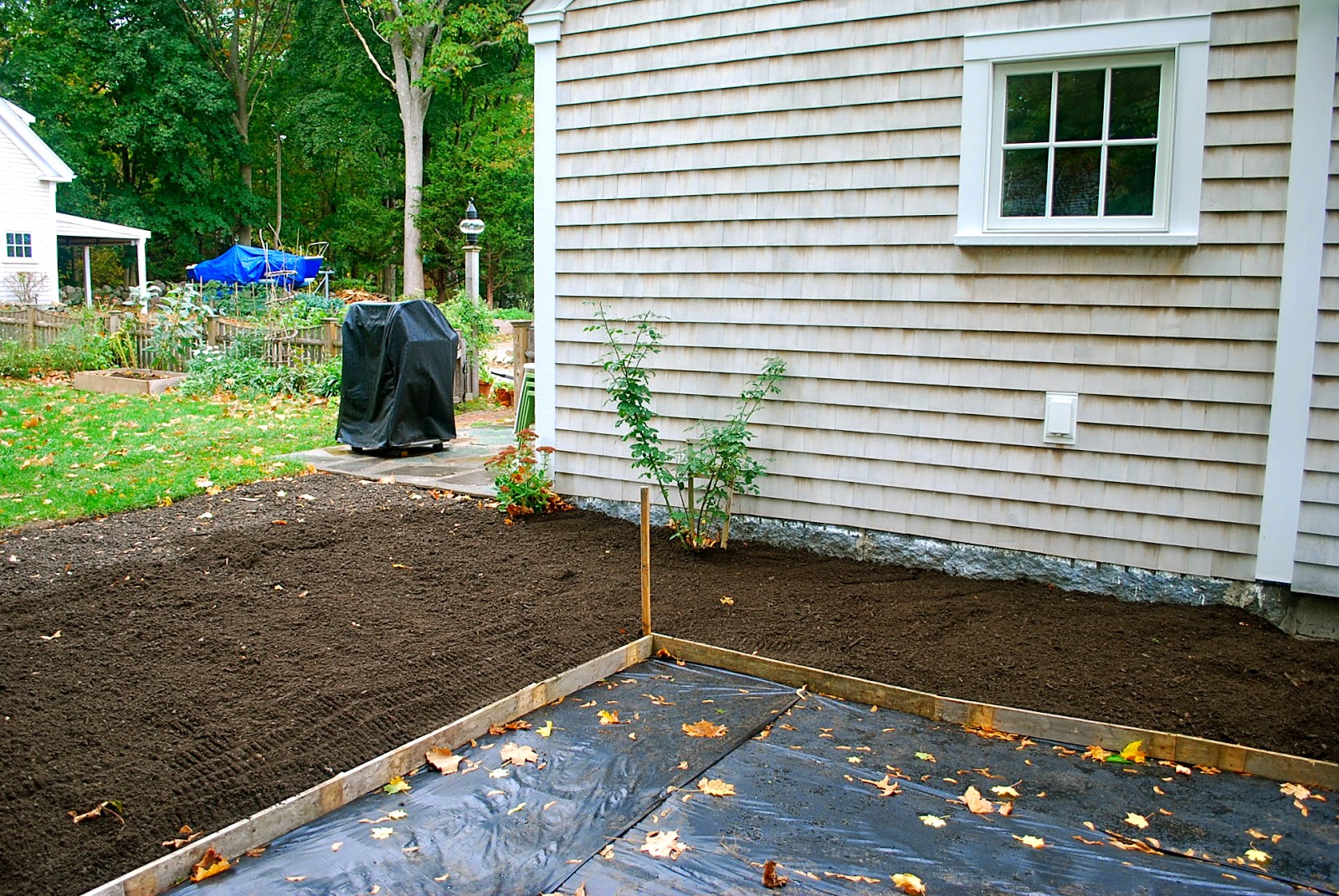 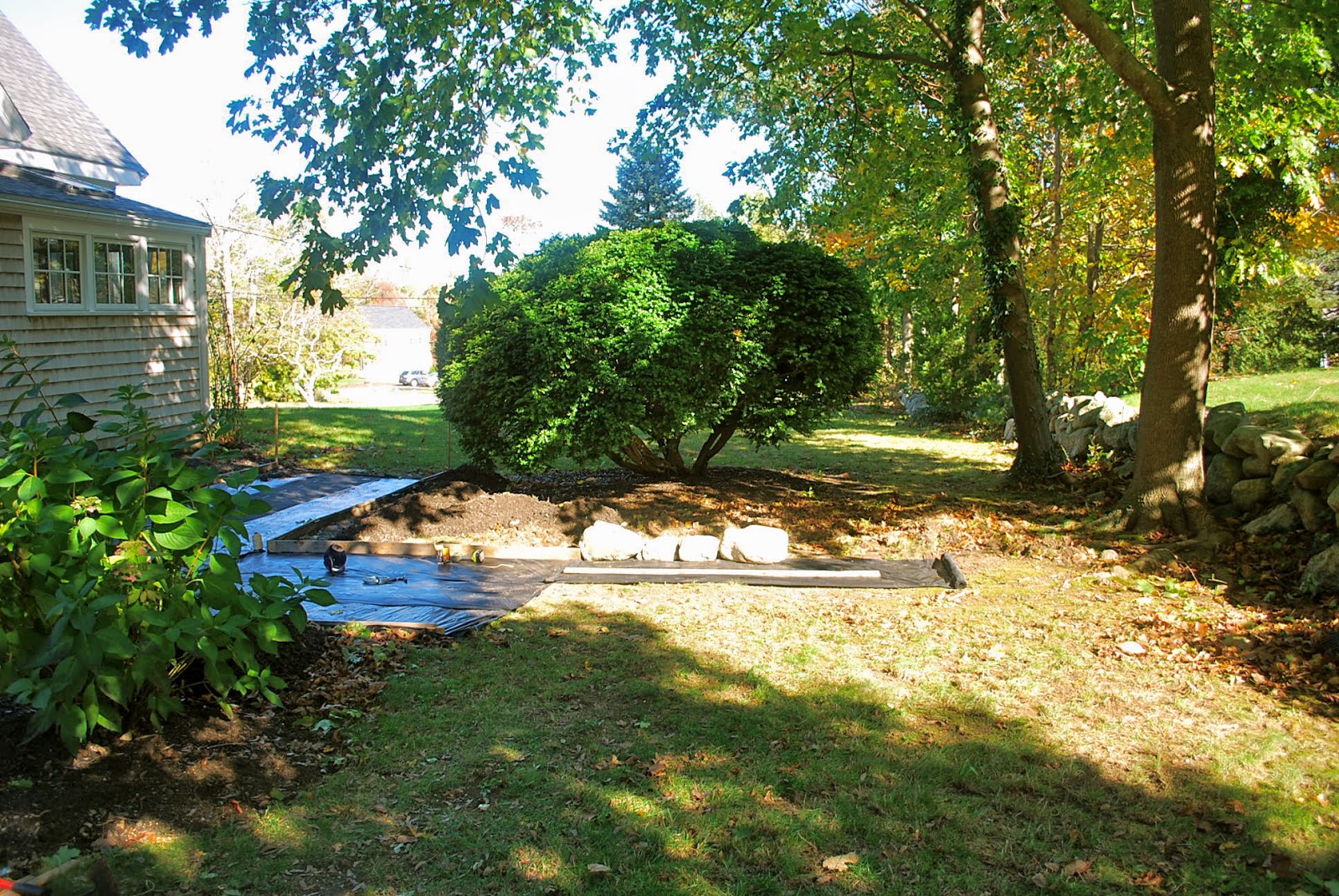 As you reach the backyard, I wanted to give the path a more natural-looking border.  Again I decided to used a material we had on hand - in this case, large boulders. 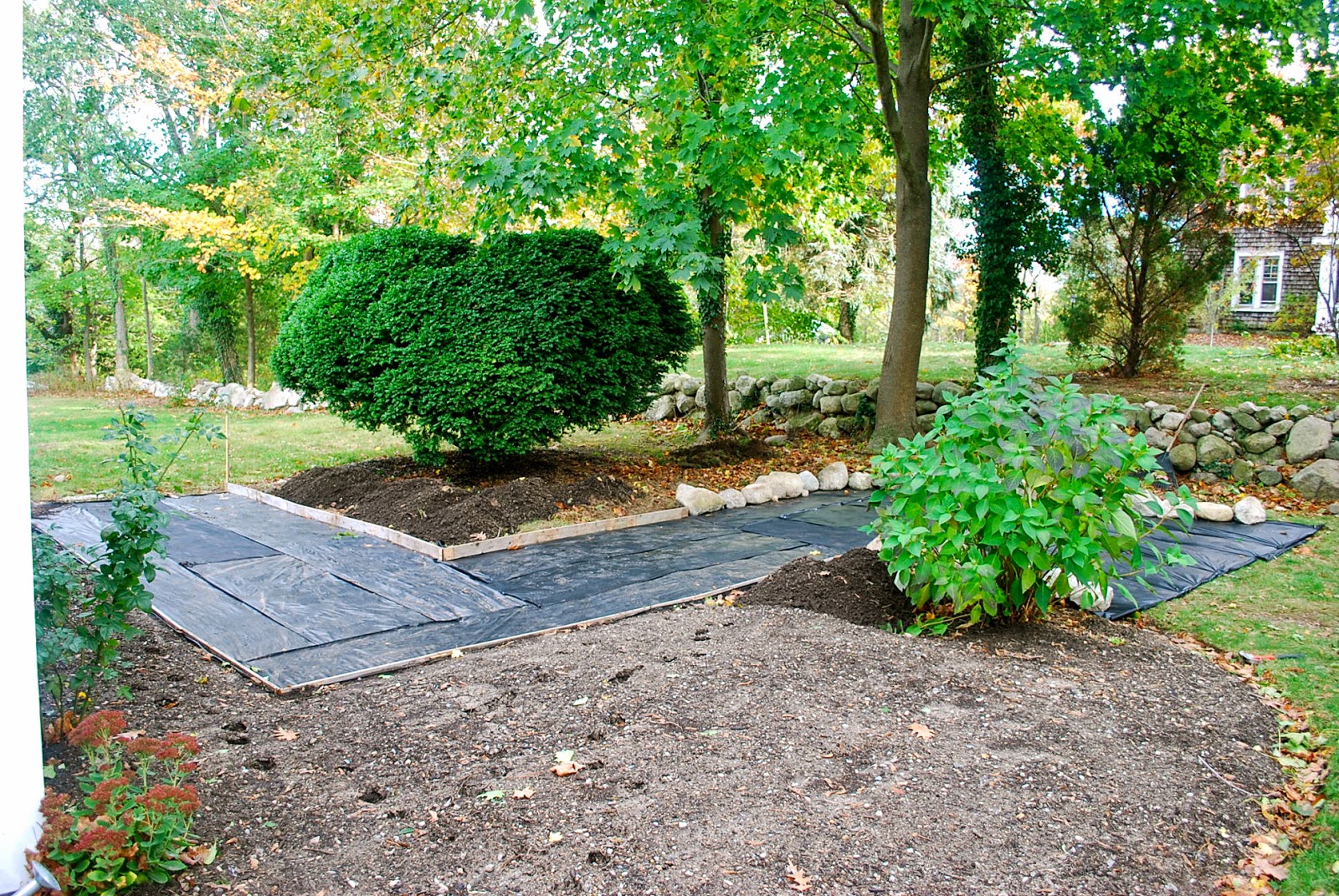 You can see how the path will bisect the future planting area in this part of the yard. 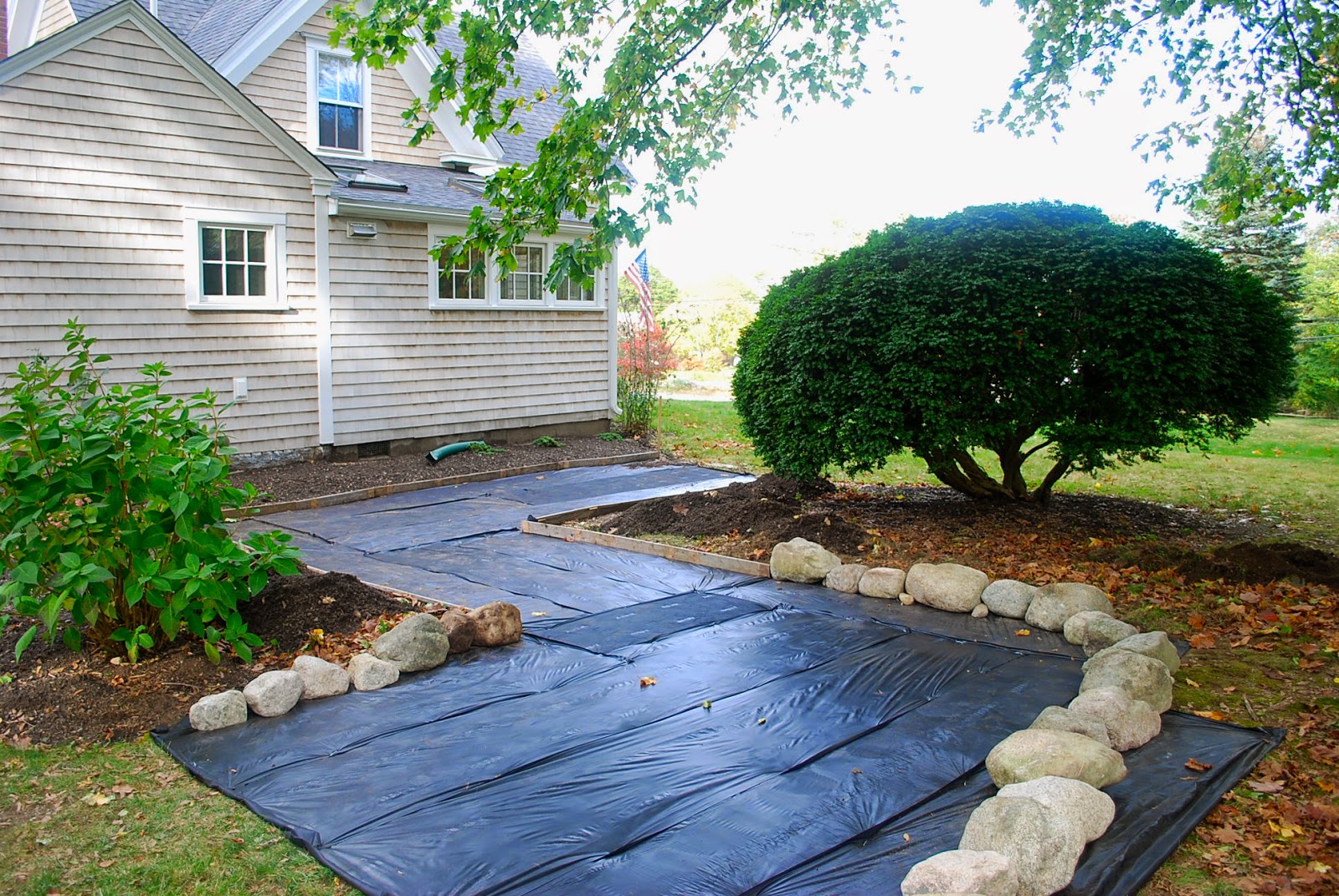 To the other side of the path (where the giant boxwood sits) will be another planting bed consisting of woodland plants that can tolerate tall shade. 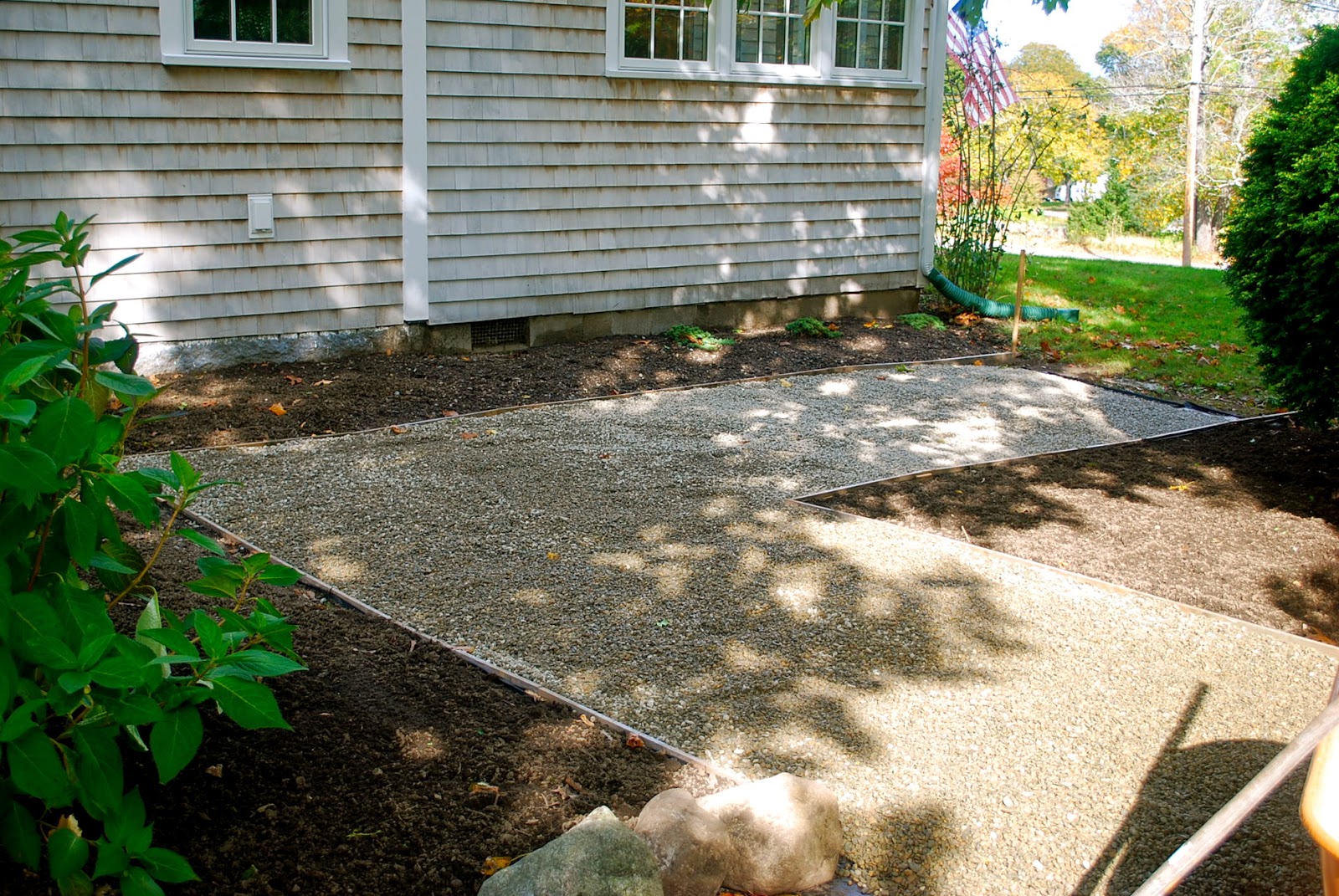 Next the hard paint - shoveling nearly three yards of pea stone and spreading it evenly throughout the path. 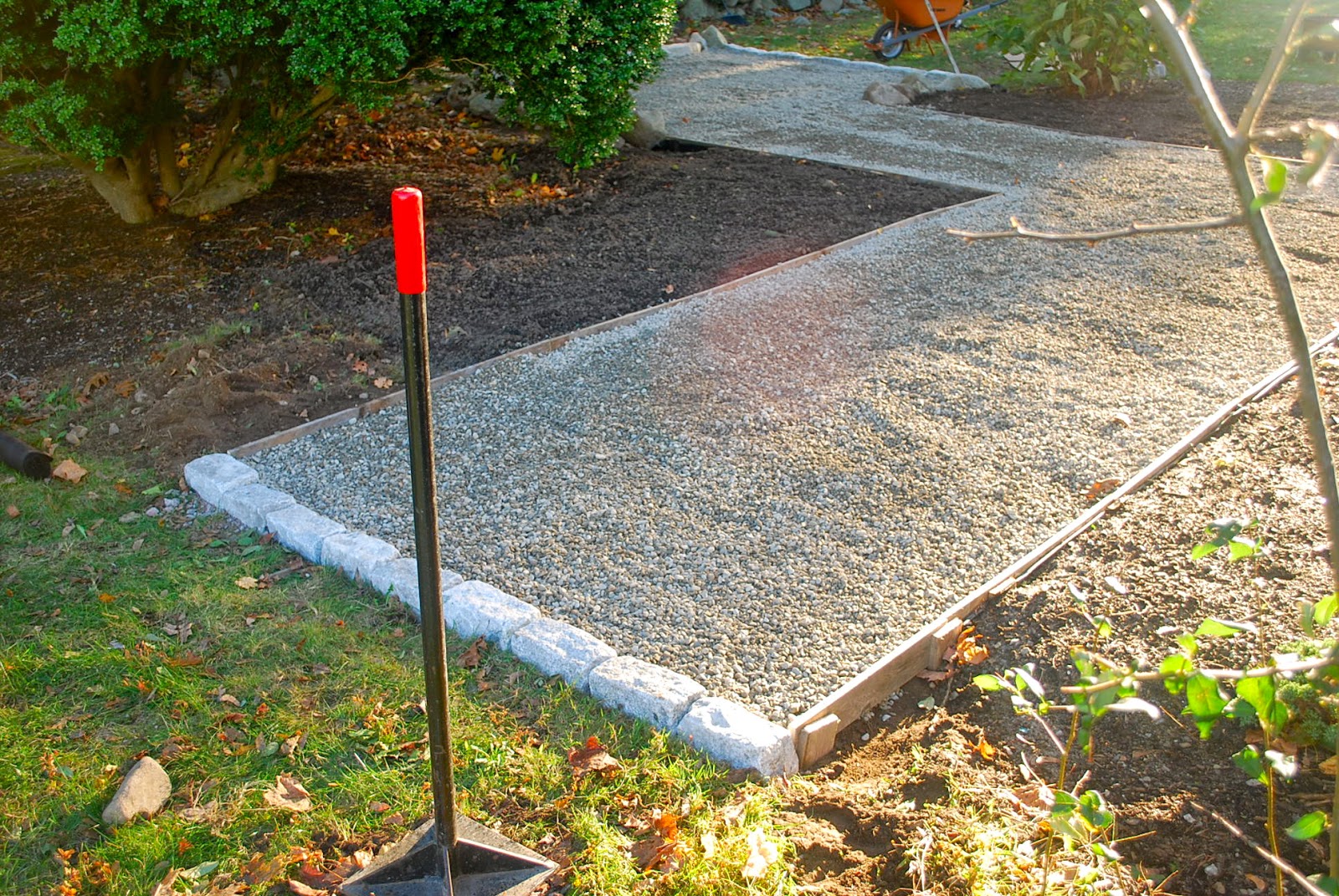 I lined the beginning of the path with some jumbo cobblestones.  They are pretty secure but I think I'll add another two layers this spring for added stability.  The other end was also lined with cobblestones as temporary measure to keep the pea stones in place until we can work on our future patio this spring. 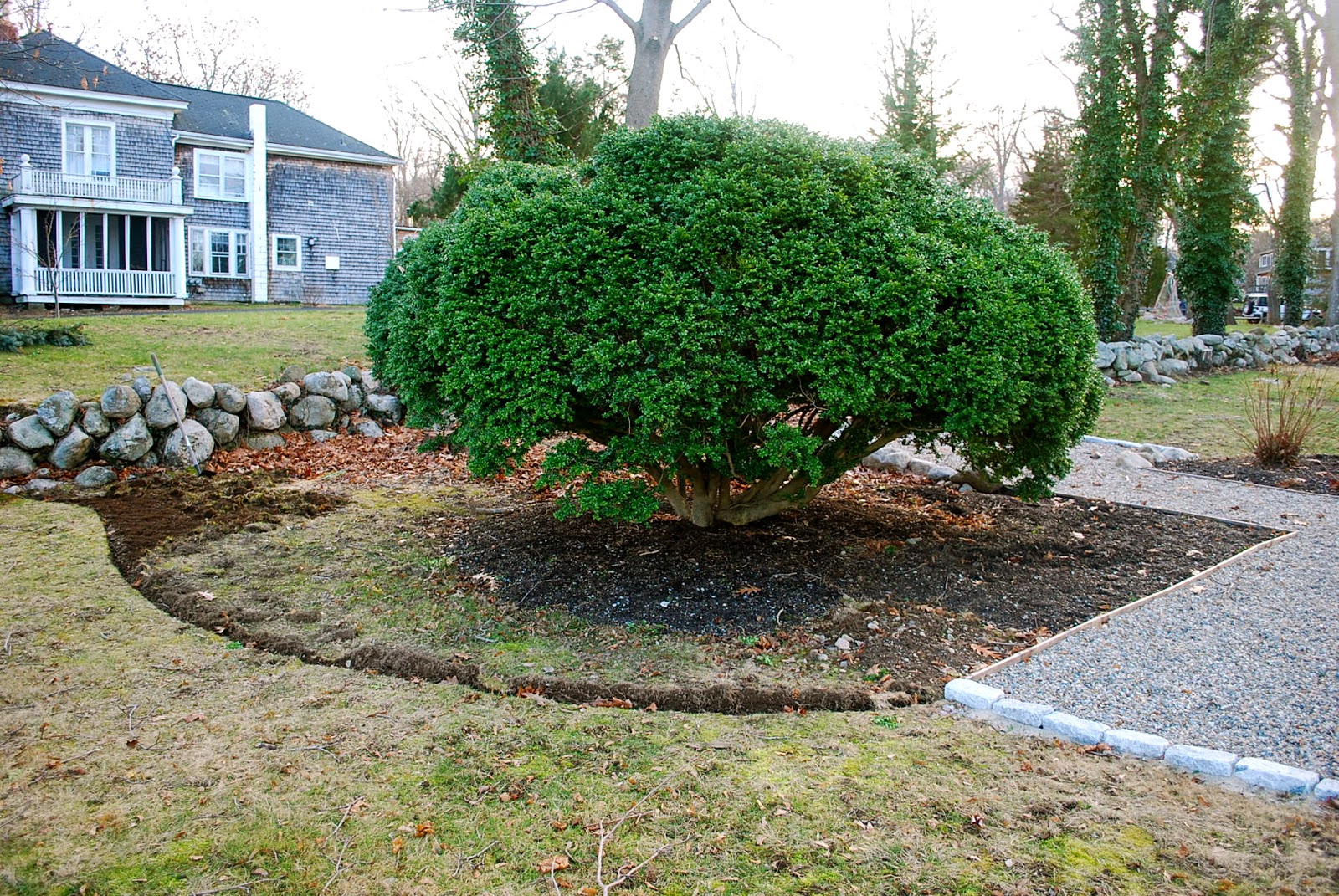 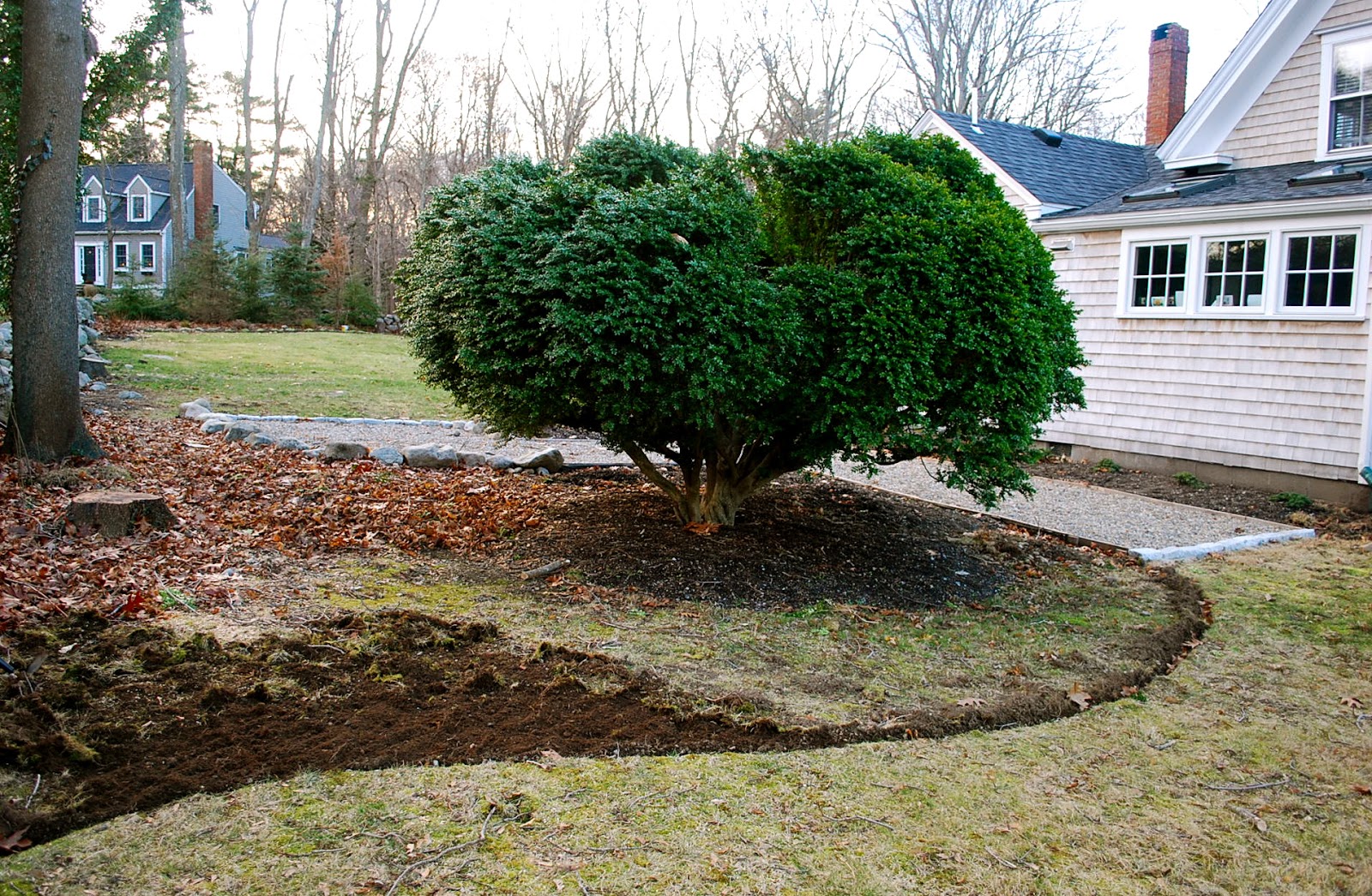 A few weeks ago, I started to shape front side of this planting bed, scraping away at the thin sod.  Because this area doesn't get much sun, the surface is more moss than grass.  Unfortunately, the ground froze over before I could any further on this project.  At this point, the project looks rather half-finished but I've since come to accept that - especially when you're working on such projects yourself.  Sure it might look a bit untidy, but it is what it is. For now, I'll just have to imagine what it might look like by next summer.  Stay tuned.
Posted by Thomas Generazio at 8:49 PM