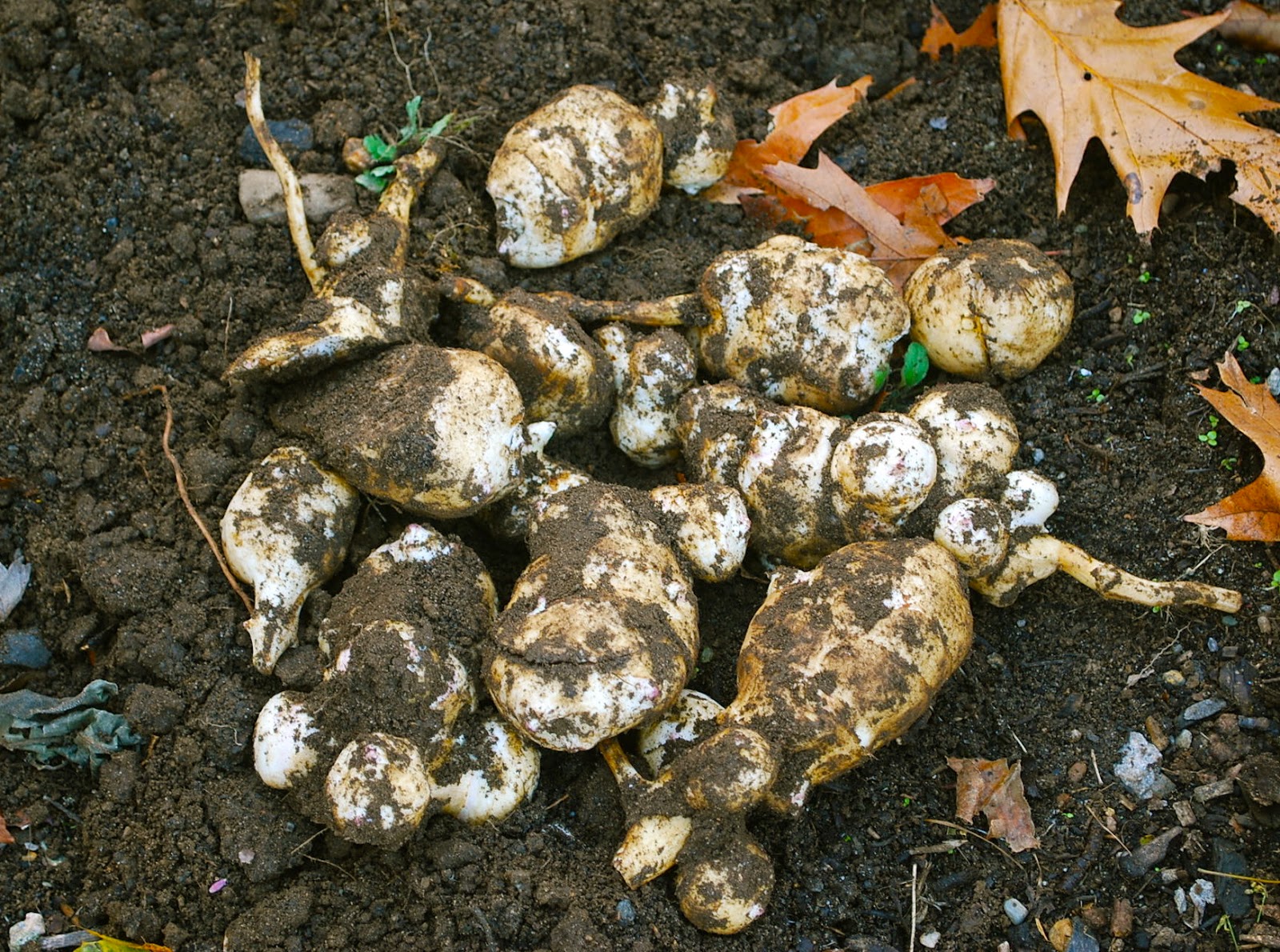 And we're back again...hopefully for the long haul, but one can never be too sure these days.  Without purposefully doing so, I ended up taking a three month break from writing about the garden.  That's not to say that I haven't been busy gardening or that I've lost interested in this blog. Only that I'd suffer through a couple of moderate health issues (one of which is pressing me to make some changes to my diet) and had been forced to slow down a bit.  But now that the New Year has arrived, I'm feeling invigorated again.  I have a lot planned for this year and am eager to get going.

In any case, after breezing through a relatively mild December, January has predictably brought with it the sudden reminder of how frigid our New England winters can be.  Temperatures fell to 0 degrees F this past week, which left me scrambling to protect some of our more vulnerable outdoor plants (like my oriental persimmon tree for instance).  Any hopes that we would get through this winter unscathed is gone at this point.  I can only hope that the next two months will be kind to us gardeners and our plants.

One thing I was able to do before the temperatures plunged last week was to dig up the bulk of my Jerusalem artichokes.  This was my first time growing this edible tuber and the results were  interesting to say the least. 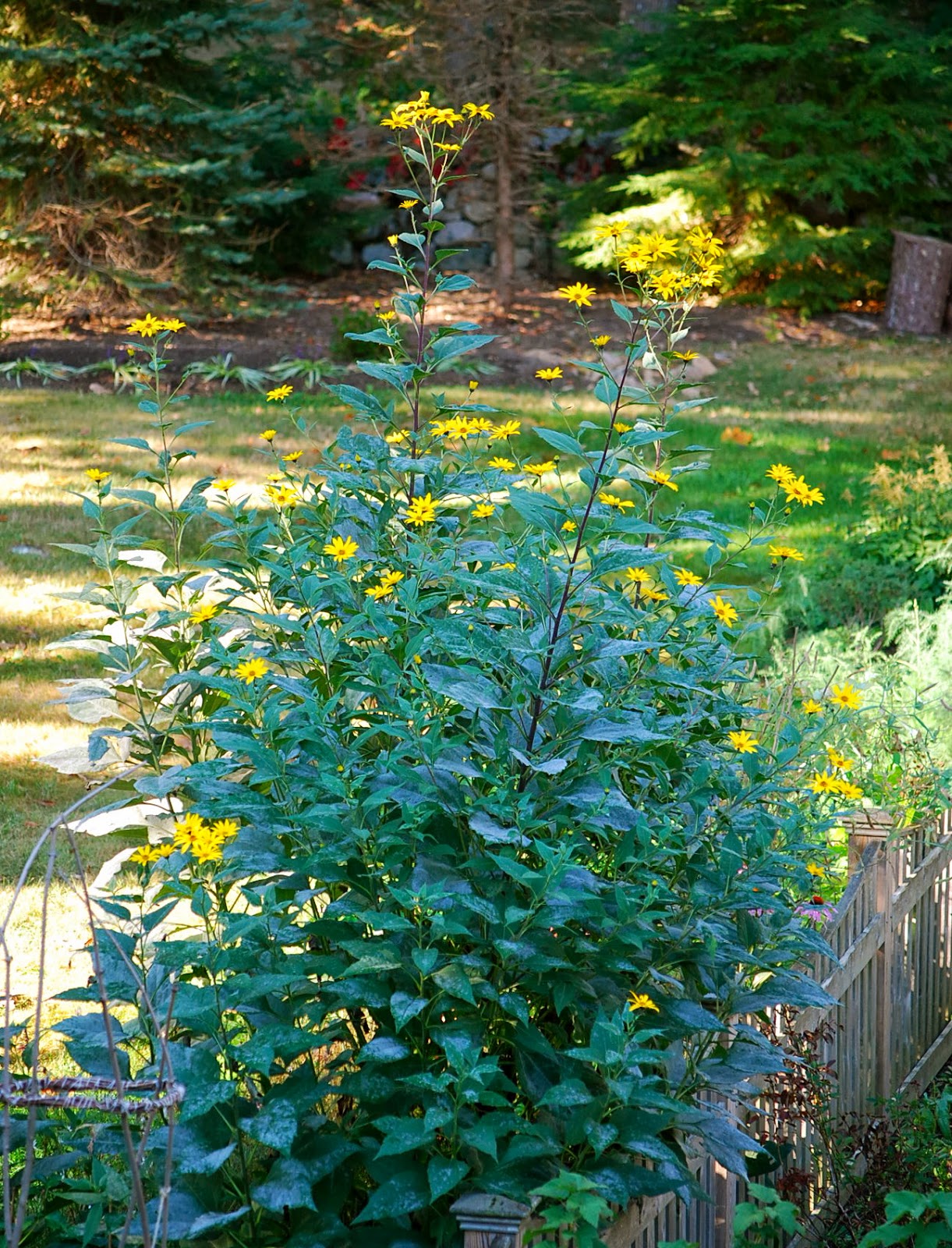 Flashback to November 2013, I'd purchased a single tuber from the produce isle at Whole Foods, cut it up into three chunky pieces and planted them at a spot in the Great Border.  The following spring, they sprouted and the resulting plants grew tall and strong as the growing season progressed. 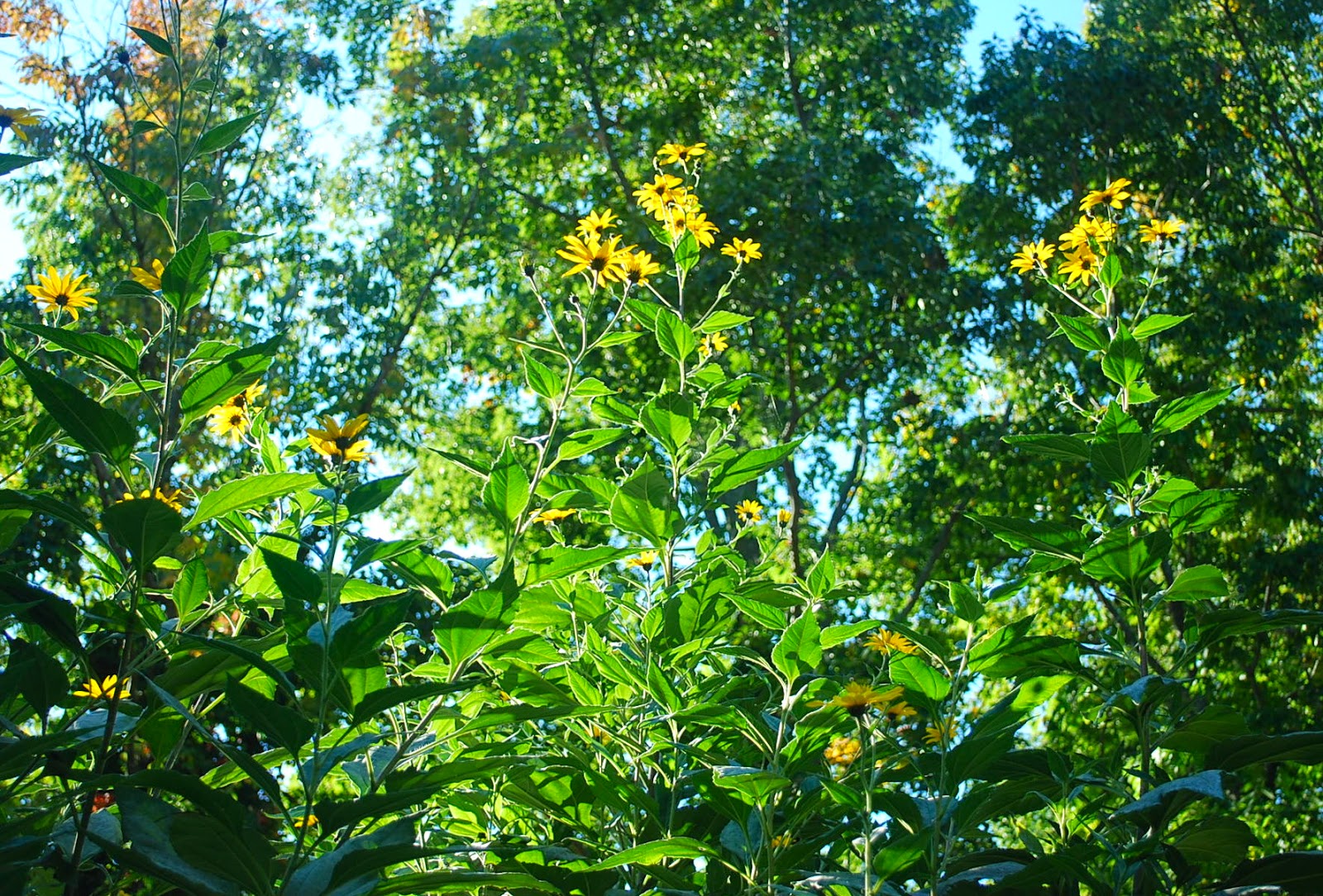 By late September, they were well over 12 feet tall, with long sturdy stems stretched high into the sky and swaying with the breeze.  I can imagine walking through a field of them, looking up at a glowing canopy of golden yellow flowers. 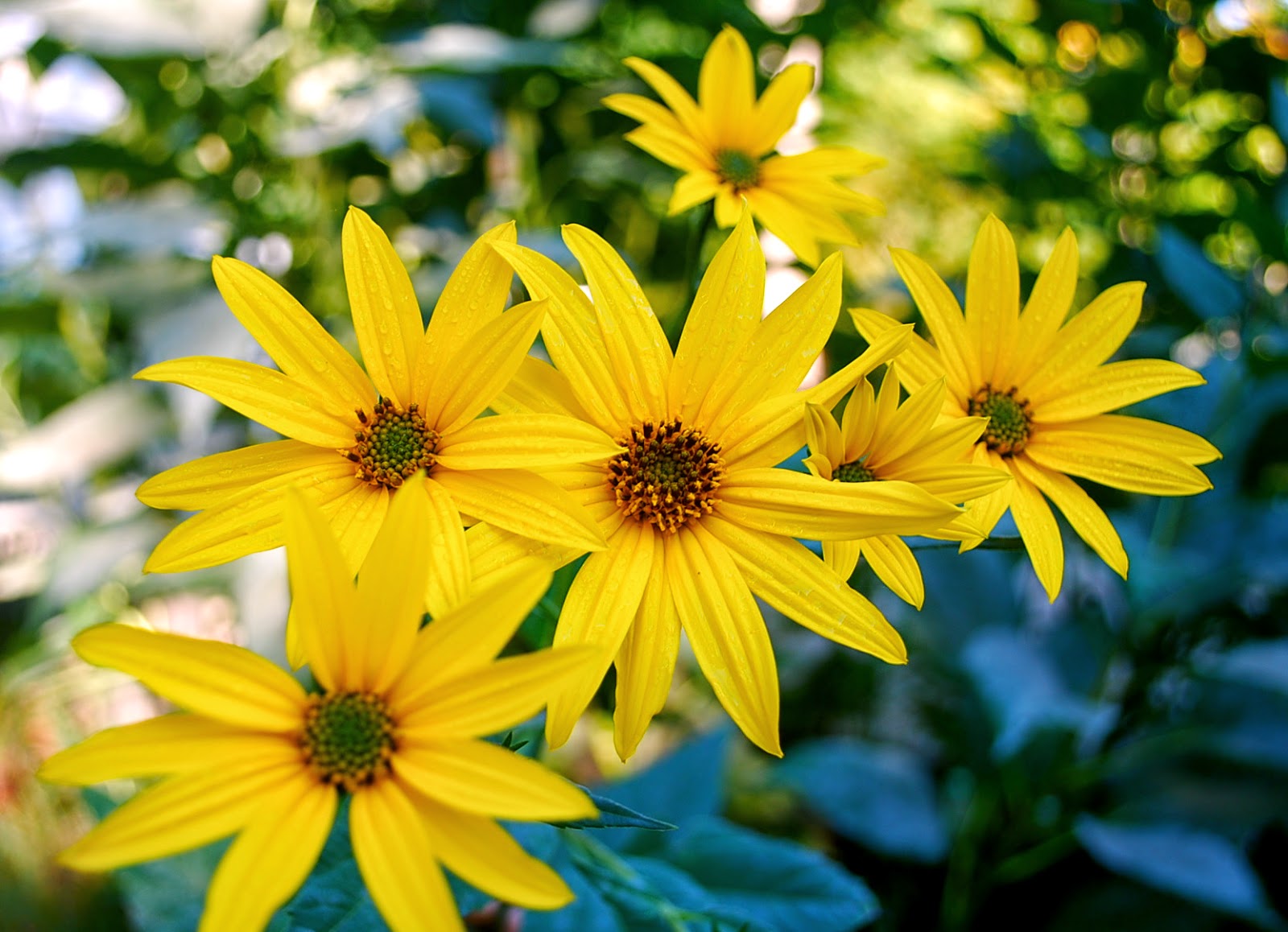 Up close, the blooms themselves are simple yet attractive, and in my opinion, perfectly fit for any fall cut-flower arrangement.  Unfortunately, they seem to fade rather quickly with the ever-so-sudden arrival of fall in our part of the world.  By mid-October, the whole plant is suffering and destined for the compost heap.  I left intact the bottom foot of the main stalk to mark where the plants were. 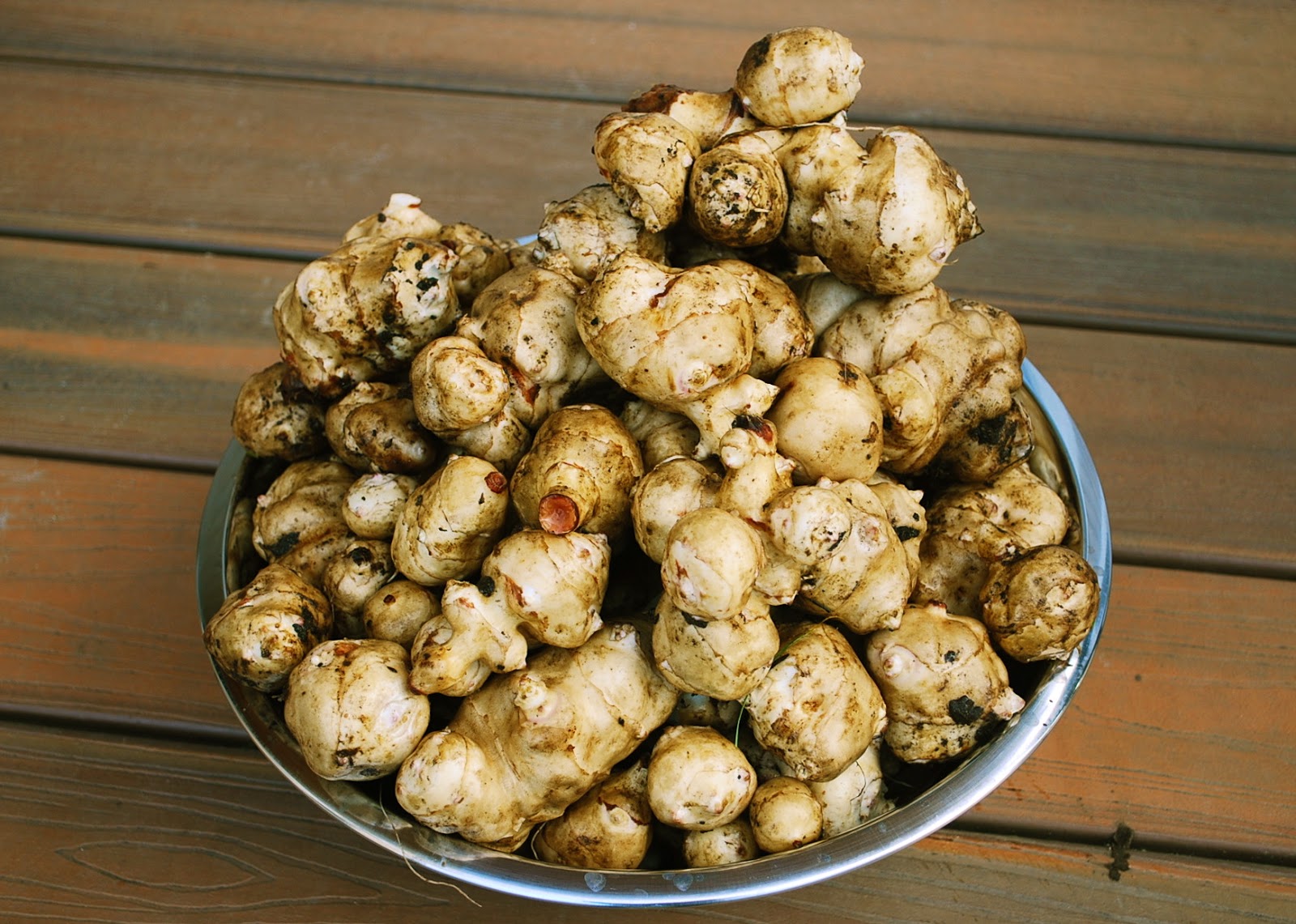 Fast forward to last week, I decided to lift the stalks and dig for some edible tubers.  And boy did I find them.  I dug in areas up to 2 - 3 feet away from the main stalks and still found them.  So far, I must have harvested about 25 lbs  - all from a single tuber purchased at the grocery store.  And I'm sure there are others that I've missed.  It's a bit unsettling if you ask me to have a plant/vegetable like this, which thrives on neglect and still produces in abundance. I can see how this plant could easily take over an entire garden if allowed to do so.  And so, if you're looking for a crop that produces very high yields with little to no work, this is the vegetable for you. (If there were ever a zombie apocalypse, I know what I'll be growing for sustenance.) 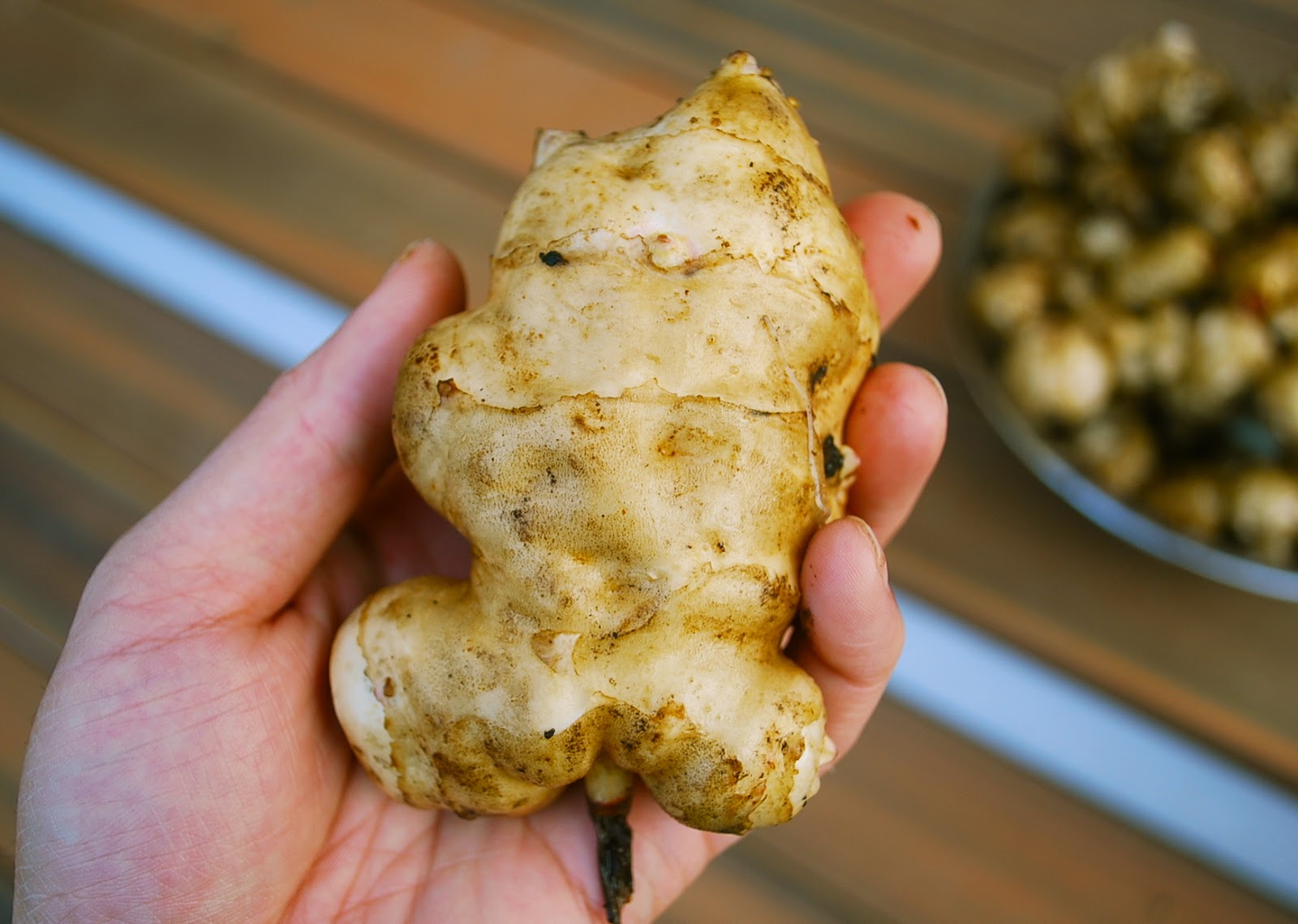 The tubers themselves were fat and completely blemish free.  I peeled and boiled a few, then sauteed them lightly in some melted butter.  The taste?  Well let's just say they're called Jerusalem artichokes for a reason.  They have a flavor and texture that's almost identical to a steamed green globe artichoke heart, without any of the fussed associated with growing or eating the latter.  (Well that's not entirely true.  They tend to propel some eaters into tomorrow if you know what I mean.)

In any case, I will undoubtedly be growing them again. However, I'll be moving the crop to an isolated raised bed to prevent any overly precocious tubers from escaping.  I don't know of any other local gardeners who are growing Jerusalem artichokes, but I hope that some of you will give them a try.  It's the lazy gardener's dream vegetable for sure.  You just dig up the lot and leave behind 1 or 2 tubers for next year's crop.  It couldn't get any simpler.
Posted by Thomas Generazio at 11:01 PM