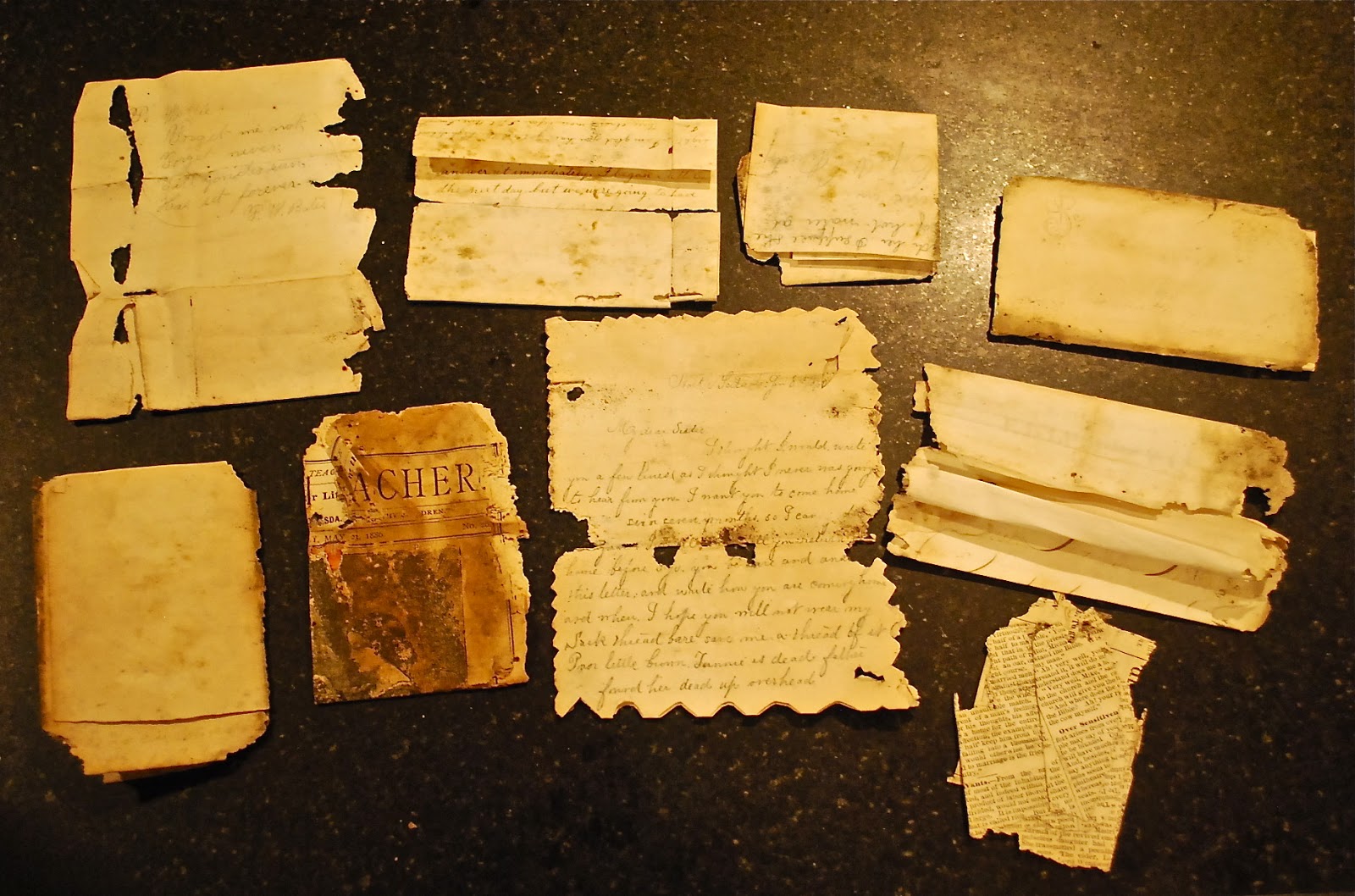 Earlier this week, our friend Paige emailed me to say that she had a little present for us.  Paige and her husband Nate are the prior owners of our property, and during their time here, had done a considerable amount of work to transform a typical New England farmhouse into the amazing home that it is today.  For me, it's the home of my dreams - not too big, not too small...it has the bones and charm of many modest homes built during the 19th century, but renovated in parts to accommodate the needs of our modern day living.  We knew from the moment we laid eyes on the 'William J. Newcomb' house, circa 1875, that this was where we were meant to be.  It just had that 'feeling' about it.  And while the future is never a sure thing, there's a part of me that believes we will be here for a very long time, or at least long enough to leave behind an indelible mark.

In any case, Paige went on to say that during the course of doing some renovations on the house, they had found some letters, which had been tucked away in the eaves of the attic, and that these letters appear to date back to the original owners of our home.  For a time, she considered giving them to the Scituate Historical Society, but now felt that it was appropriate to turn them over to us for safekeeping.  I will admit that I was a bit shocked by this revelation and had to read these lines several times for it to sink in.  I've always had an interest in American history (having majored in it at college) and in old homes, and to have a relic from the past, particularly of the people who once occupied our own home, seemed in many ways awesomely fortuitous and very special.  To think that these letters remained undiscovered for over a hundred years, that they might offer us a small glimpse into the lives of the Newcomb family - it's beyond words to express how I excited I am about this. 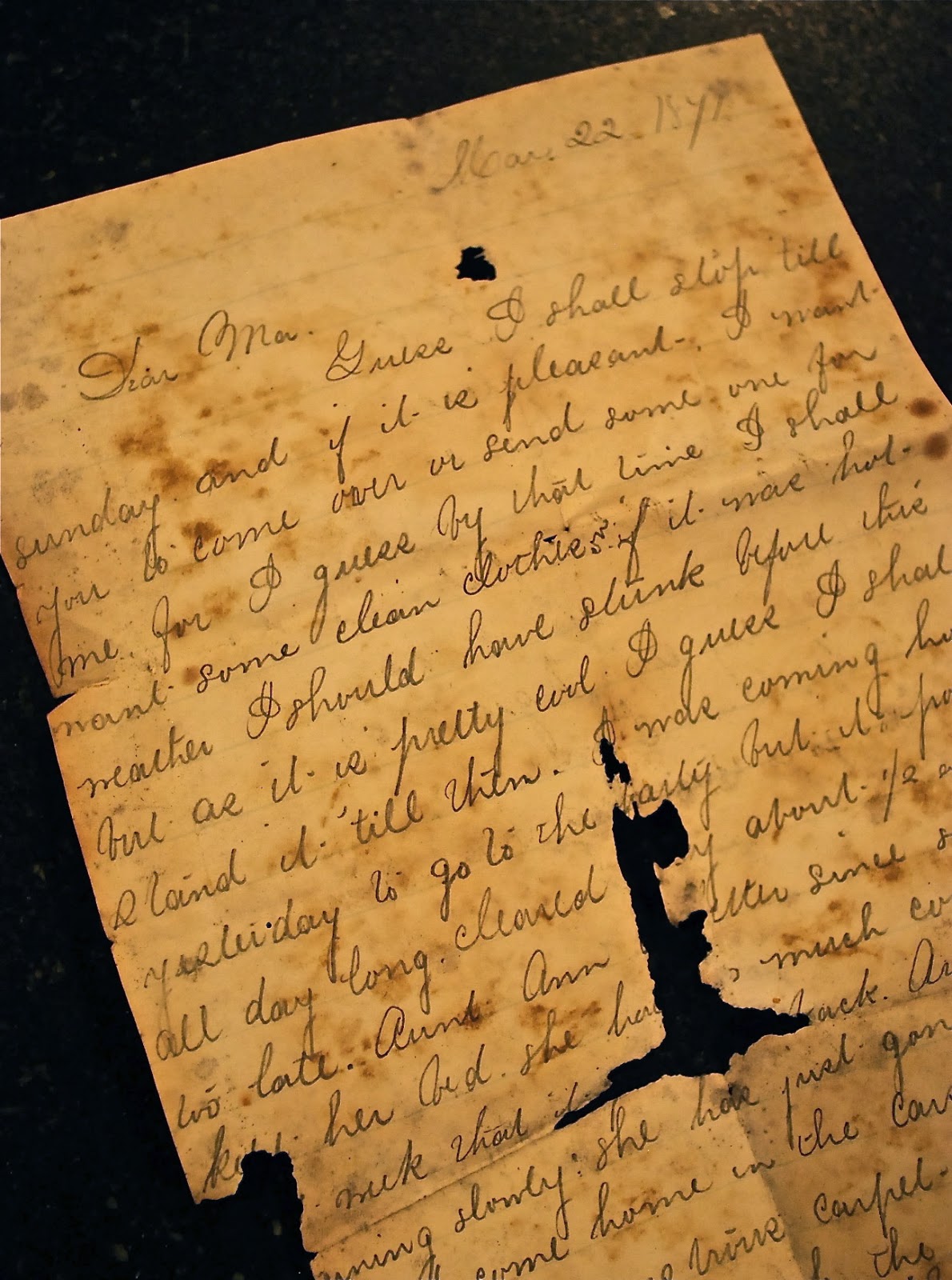 So Marc and I spent some time this past Wednesday night carefully examining these letters.  Sadly, they are all in rather rough shape, having been subjected to the harsh atmospheric conditions of our uninsulated attic for almost 140 years.  We can decipher only parts of each letter at best.  Some remain barely intact, flaking away at the edges and folds, while others contain handwritten words that have mostly faded with time.  Still, there's definite indication that these letters were sent to the family's matriarch and that it was she who had tucked them away.  There's one letter from a son to his 'Ma' dated 1871 (six years after the American Civil War!) about the fact that his need for clean clothes has been tempered by the cool weather, though he would like for her to come over or send someone over to remedy his laundry situation (I guess somethings never change). There's another letter between sisters that offered the details of an Aunt's garden party and the possibility of a visit.  Also a letter of affection, though too faint and damaged to comprehend fully. 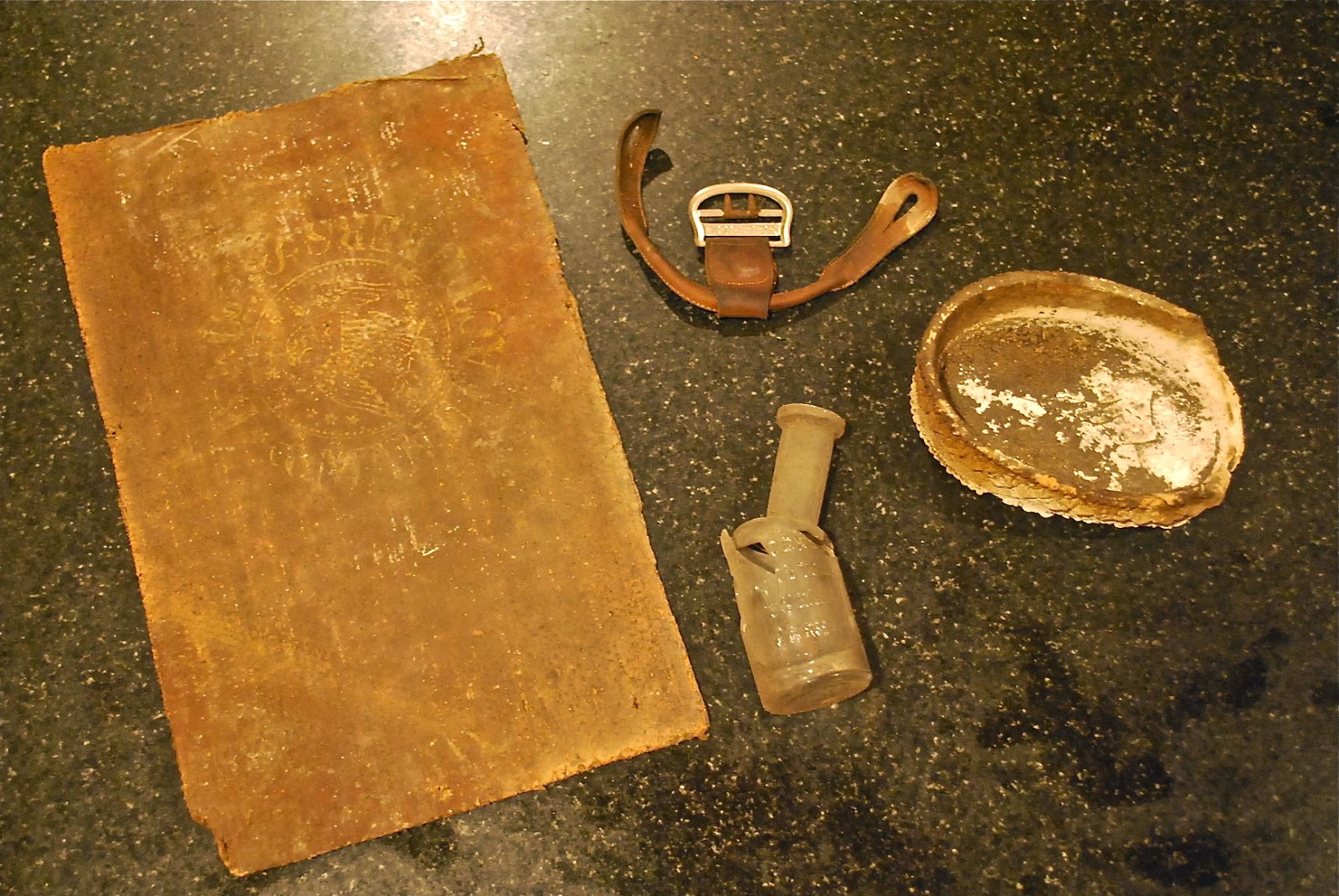 Paige also gave to us some relics that had been discovered around the property - a broken medicine bottle, a decorative ceramic dish of some kind, a rectangular piece of leather stamped with a large insignia, and a buckle of some kind (previously part of a leather satchel perhaps). 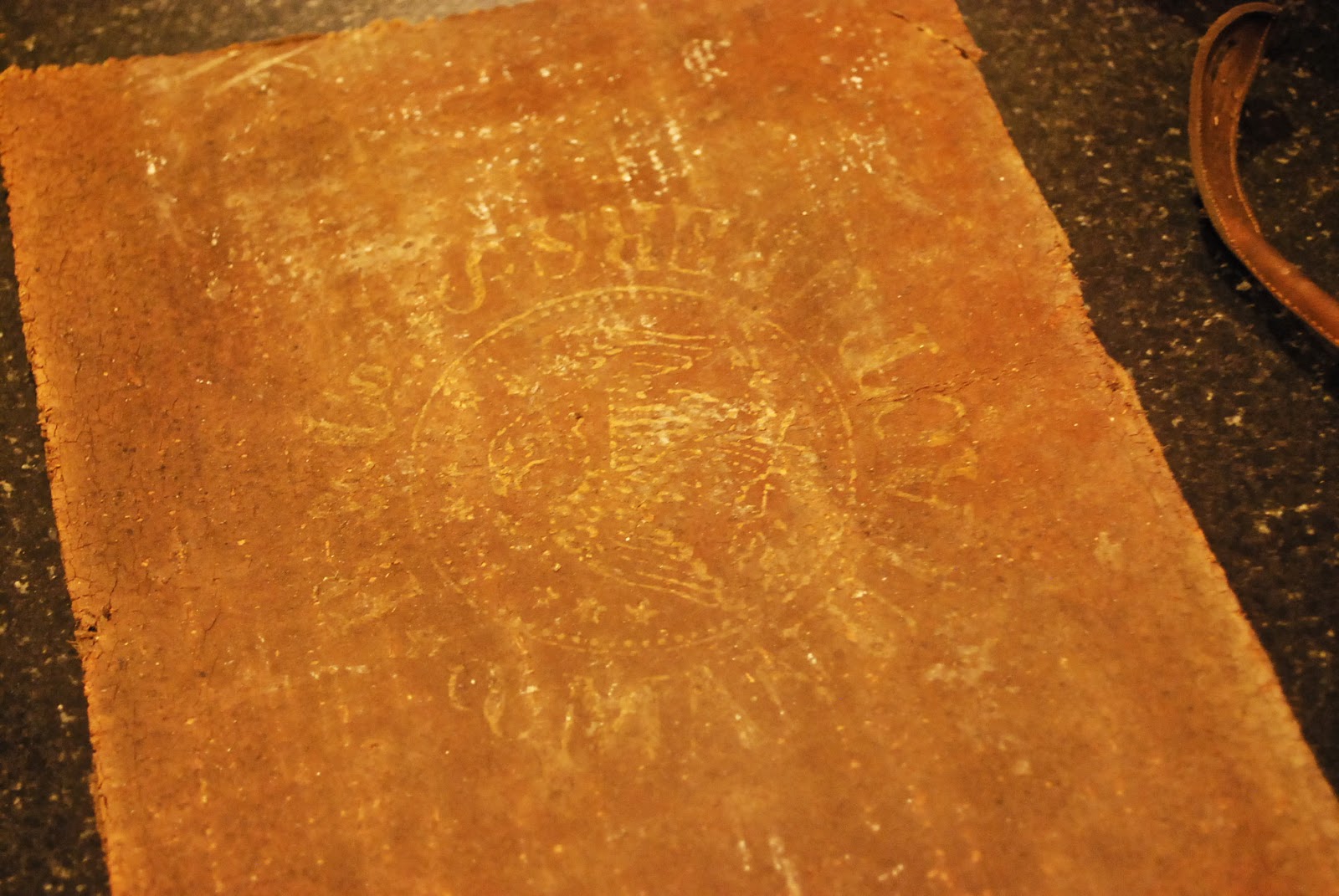 It was difficult to decipher the lettering on this insignia, but it appears to read 'B & Co. Manufactures'.  Pictured in the center is a bald eagle surrounded by stars. 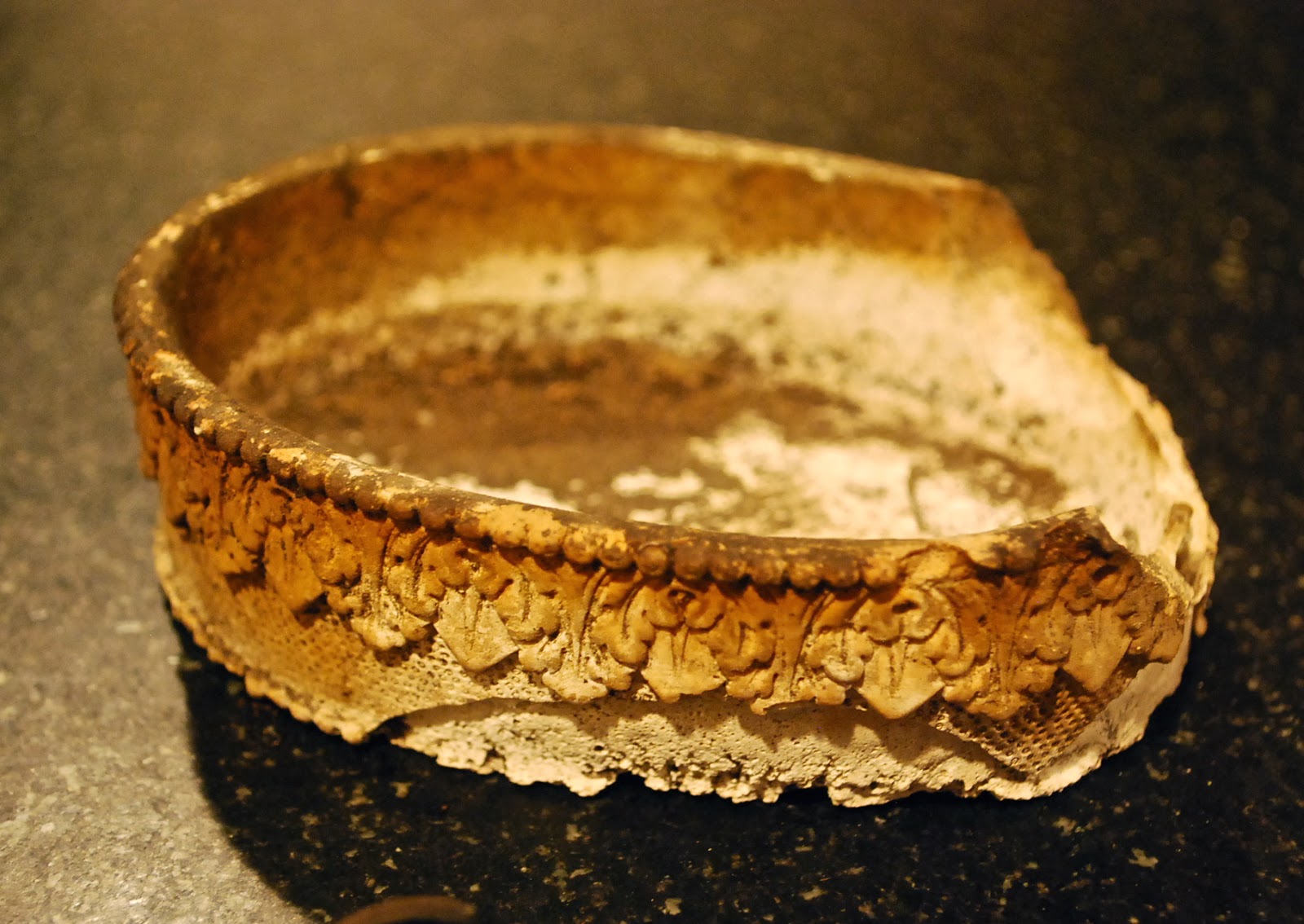 Could this have been a candy dish of some kind?  It looks too decorative to be an ashtray.  Hopefully we'll know for sure one of these day.

We'd like to send the letters off to a professional to have them preserved in a shadowbox and maybe translated by someone accustomed to examining such things.  Eventually, I'd like to display these artifacts in our study, as they remain part and parcel of this house.  But for now, we've tucked away our treasures to some place dark, sealed and safe.  I'd also like to pay a visit to the Scituate Historical Society to learn more about the Newcomb family and to see whether there might be other letters or documents out there.
Posted by Thomas Generazio at 9:05 AM